The four intrinsic tongue muscles work together to give the tongue great flexibility.

Anatomy and Physiology: The Terrific Tongue

Anyway, because our tongues can bend, elongate, shorten, and twist so freely, they’re great for helping us swallow food and for producing an impressive inventory of unique speech sounds. They’re also the key to our sense of gustation (that is, taste).

So let’s talk about the structure and functions of humans’ weird and wonderful muscular hydrostat!

The Structure of the Tongue 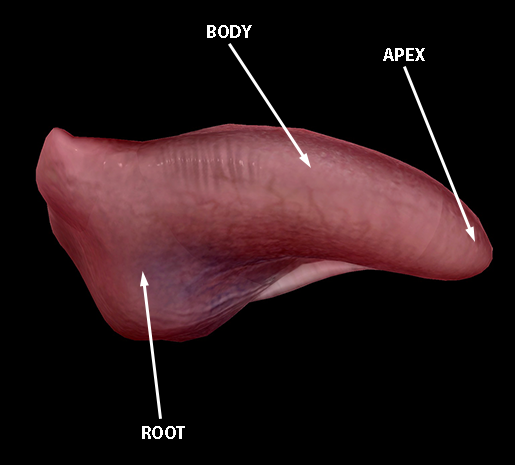 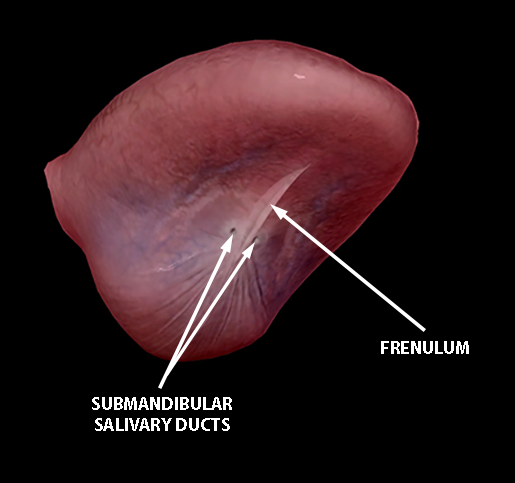 I hate to break it to you, but those little things you see sticking up out of your tongue are not your tastebuds: they’re most likely papillae. The dorsal and lateral surfaces of the tongue are home to a bunch of these small projections, and there are a few different varieties of them.

The vallate papillae, which sit in a row on the dorsum of the tongue, contain lots of tastebuds (100–300 per papilla). 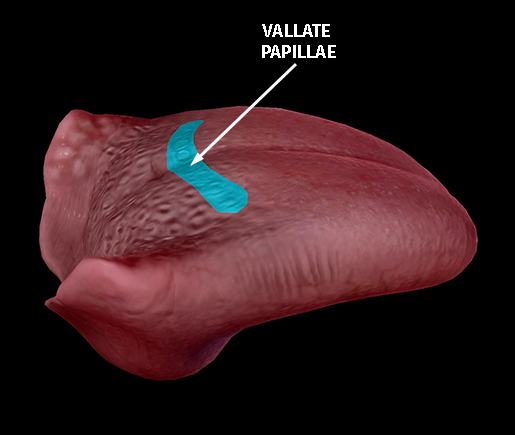 Fungiform papillae, which contain about 5 tastebuds each, are found protruding mostly from the sides and apex of the tongue. They’re large (in the relative sense) and mushroom-shaped, thus the name “fungiform." 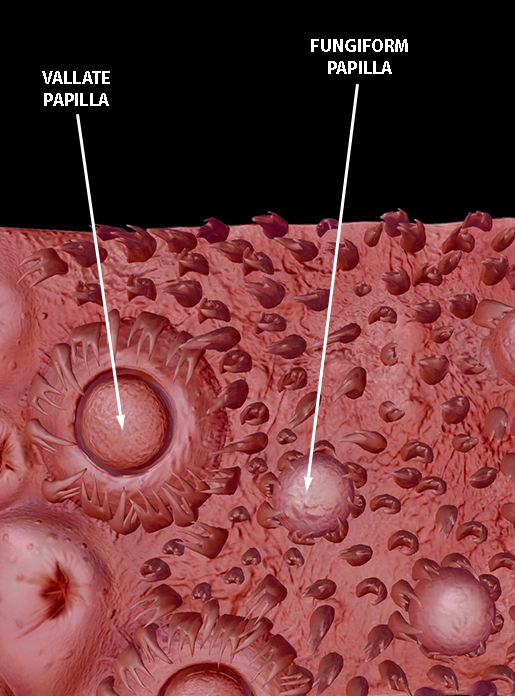 Foliate papillae are located in small grooves on the sides of the tongue. Though foliate papillae don’t contain tastebuds themselves, the mucous membrane that covers them does have a few tastebuds on its surface.

Lastly, filiform papillae can be found all over the tongue. They don’t contain any tastebuds, but they do have touch receptors.

The superior longitudinal muscles run along the tongue just below the superior surface’s mucosa. These muscles shorten the tongue and dorsiflex its tip.

You can check out a nice summary of tongue movements here.

The extrinsic tongue muscles are vital to the process of swallowing and help the tongue to move around in the mouth. All of these muscles originate outside the tongue and insert into it at various points. 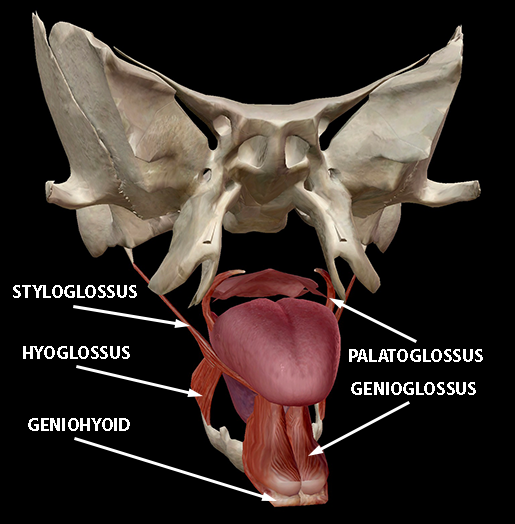 When we produce speech, the tongue serves as a versatile articulator. Many consonant sounds are produced by a particular part of the tongue obstructing the flow of air coming up from the trachea at a particular place in a particular manner. For example, a t or d sound in English is produced when the front of the tongue touches the alveolar ridge (just behind the front teeth), briefly stopping the stream of air and then releasing it. A k or g involves the dorsum of the tongue making contact with the velum (soft palate) as it briefly blocks the air stream.

The tongue is important for vowel production, too! The position of the tongue in the mouth determines a vowel’s height (high, mid, low) and whether it is a front, central, or back vowel. For example, a high front vowel would be the “ee” in “free” and a low back vowel would be the “ah” in “spa.” The tongue also determines whether a vowel is tense or lax. Both the “ee” and “ah” I discussed are tense—the schwa (ə), as in the first syllable of “maroon,” is a good example of a lax vowel.

You can read more about the anatomy and physiology of speech sounds here. For now, let’s move on to the tongue’s role in swallowing food.

The tl;dr version is that the tongue pushes food around in the mouth while you break it up with your teeth and it pushes chewed food (now called a bolus) toward the oropharynx. The filiform papillae on the tongue make this easier by helping to increase friction between the tongue and the food.

Swallowing has an oral, pharyngeal, and esophageal stage (each one is named for the location of the bolus as it passes from the mouth, into the pharynx, and down the esophagus). Scientists break down the oral phase of swallowing liquid into two stages, and they use the more complex Process Model to describe the oral stage of swallowing solid food.

Let’s say you’re drinking a glass of water. In the oral preparatory stage, you take a sip of water and your tongue forms a seal against your soft palate, holding the water in the front of your oral cavity. Then, during the oral propulsive stage, the tip of the tongue comes up to the alveolar ridge and the tongue-velum seal is broken. The tongue continues pressing up against the top of the mouth from front to back, pushing the water towards the pharynx and initiating the pharyngeal stage of swallowing. Pretty simple.

Now let’s say you’re having a snack with your glass of water—an apple. You bite into it and then, in the stage 1 transport phase of the Process Model, the tongue pushes the piece of apple towards your back teeth so you can chew it.

Food processing begins and the movements of mastication (chewing) and secretions from your salivary glands begin the physical and chemical digestion process, forming a nice (and by nice I mean mushy and kinda gross) bolus you can swallow. As you chew, your tongue moves in cyclical motions to help keep the food in the right place.

Stage 2 transport works similarly to the oral propulsive stage: the tongue presses against the top of the mouth from back to front, moving the bolus to the back of the mouth. After that, it’s the pharynx’s turn to take over.

Though the tongue enables speech and swallowing, we probably more readily associate it with our sense of taste. So how does the sense of taste work? 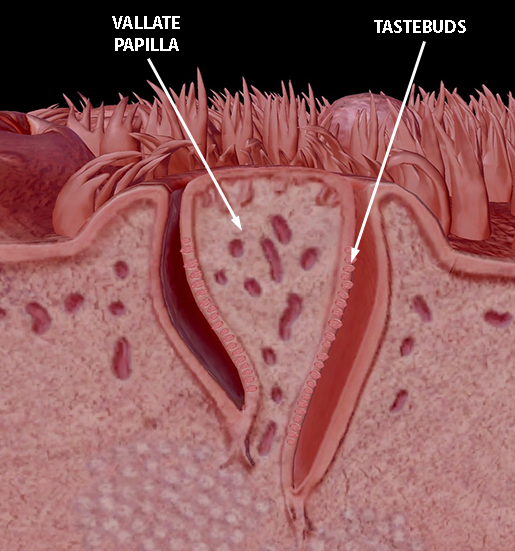 As I mentioned earlier, many of the papillae on the tongue’s surface contain tastebuds. Tastebuds aren’t exclusive to the tongue, though—they can be found elsewhere in the mouth and upper throat. Each tastebud contains an opening called a pore, where food dissolved in saliva can enter. It also contains specialized epithelial cells that respond to chemicals in food called tastants. Little hairs at the ends of these cells provide sites for tastant molecules to bind to receptors, which triggers an action potential.

If you’ve studied olfaction, this probably sounds like a pretty familiar process. Fun fact! The nature of the receptor cells is a key difference between gustation and olfaction: whereas receptors in the olfactory epithelium are neurons, gustatory cells are just epithelial cells with a very specific function. The gustatory cells pass on their action potential to neurons of the facial, glossopharyngeal, and vagus nerves. From there, the signals pass to the medulla oblongata, then the thalamus, and then (at last) to the gustatory cortex in the cerebrum.

Our tastebuds can detect whether something is sweet, salty, sour, bitter, or umami (savory), but we can thank our noses for the array of complex flavors we know and love. When we “taste” a flavor, olfaction is really doing about 80% of the work. Why? When you’re tasting, you’re usually smelling as well. Odorants rise off the food in your mouth while you’re chewing on it. These odorants travel through the retronasal pathway and they get picked up by the receptor cells of your olfactory epithelium. 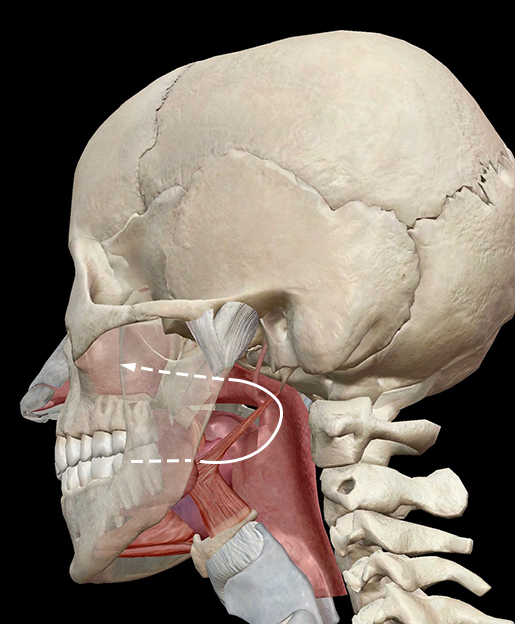 And there you have it! Whether you’re talking, eating, talking about eating, or talking while you’re eating (not advised), the tongue is hard at work. Its combination of intrinsic and extrinsic muscles give it great range of motion and flexibility, and its papillae contain the tastebuds that allow you to identify the foundational flavors of the food you eat.