The diaphragm is the principal muscle of inhalation and separates the thoracic and abdominal cavities.

Anatomy and Physiology: The Relationships of the Respiratory System

The Visible Body Blog · Anatomy and Physiology: The Relationships of the Respiratory System

Place your hand over your chest, take a deep breath, and then let it out.

Of course you already know that your lungs fill with air when you breathe, but did you know that your respiratory system does more than simply move oxygen into and out of your lungs? The structures of the respiratory system interact with structures of the skeletal, circulatory, and muscular systems to help you smell, speak, and move oxygen into your bloodstream and waste out of it.

We're going to take a look at the relationships between these systems and how they work to keep you breathing 24/7/365.

The Lungs of the Respiratory System

The lungs are asymmetrical, conical in shape, and have a spongy texture. If you look in the image below, you'll see a treelike structure in each lung. This structure is the respiratory tree; bronchi—air pathways in the lungs—branch into smaller and smaller bronchioles, each ending in millions of air sacs known as alveoli, where gas exchange occurs. Gas exchange is the conversion of oxygen (what you inhale) into carbon dioxide (what you exhale).

Did you know the surface area of one lung is 750 sq. feet? That is the size of a singles tennis court!

Respiratory System and the Skeleton 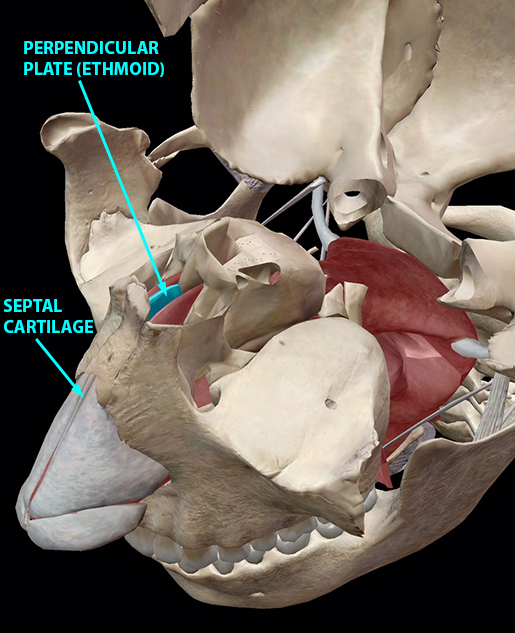 Respiratory System and the Laryngeal Skeleton

Did you know that you're able to produce sounds because of the air you breathe? It's true! In the laryngeal skeleton (a structure comprised of cartilage in the throat area) are the true vocal folds, or vocal cords, which allow you to speak. When air passes over the folds, they vibrate, and it is these vibrations that others (and yourself!) hear as sound.

Here's a cool little factoid: The sinuses in the skull, the thickness of the vocal folds, and the resonance area of the throat give each person’s voice its own character. While people have similar body structures, no two people are completely alike, which also is true for distinct voices.

Respiratory System and the Nerves

Ever wonder how you're able to smell something yummy and recognize it? The respiratory and nervous systems work together to identify odors in your environment. The cribiform plate of the ethmoid bone supports the olfactory bulb and the foramina in the ethmoid give passage to branches of the olfactory nerves. 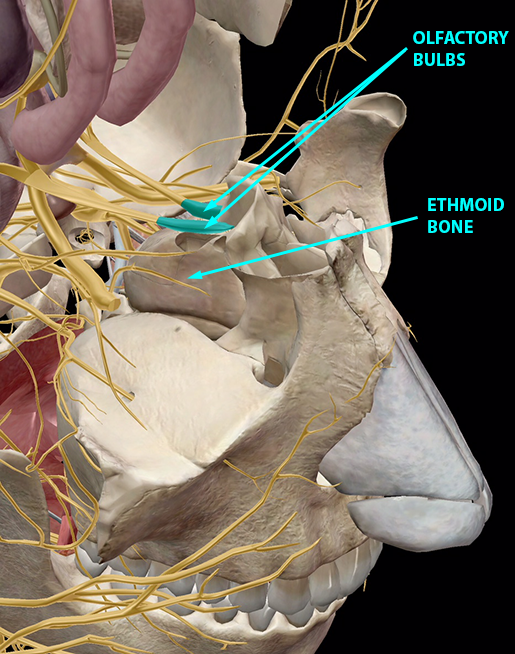 I know I've mentioned the role that blood plays in your body at some point. To recap, blood is the fuel that keeps you going! Oxygenated blood is brought to organs and tissues via the arteries, while veins bring deoxygenated blood back to the heart to be replenished. The point is, without the respiratory system your blood would be useless.

Respiratory System and the Muscles of Inhalation and Exhalation

The muscular and nervous systems enable the involuntary breathing mechanism. The main muscles in inhalation and exhalation are the diaphragm and the intercostals (shown in blue), as well as other muscles.

Exhalation is a passive action, as the lungs recoil and shrink when the muscles relax. 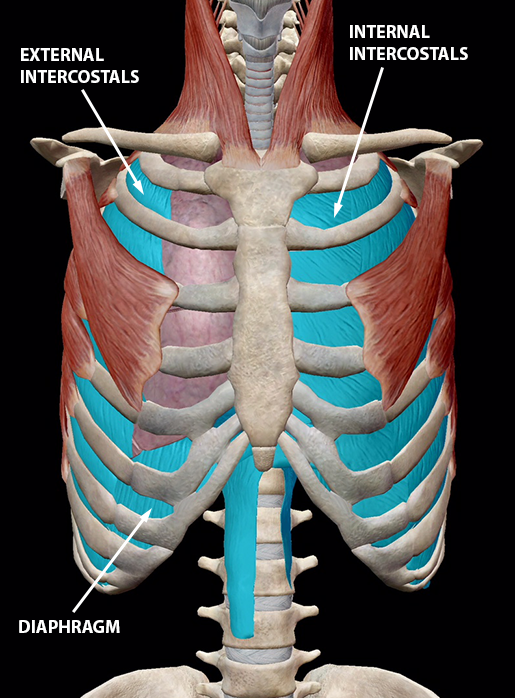 Asthma also occurs in the bronchi and can happen all year; it causes the airways of the lungs to swell and narrow, leading to coughing and shortness of breath.