Rotate the 3D model to see how the urethra runs through the prostate.

Aaaaand, here we are with part two. I'm glad everyone enjoyed the first one (thanks for the comments!); hopefully y'all walked away with a little extra knowledge. Or an image of a uterus as a kung-fu master stuck in your mind. Either way, mission accomplished.

While I don't have anything to match up to the kung-fu thing, I do have a sort of game we can play. It's kind of like "Whose Line Is It Anyway?" or a political debate: everything is made up and the points don't matter. I call it "How artfully can Courtney hide certain aspects of external male anatomy in the pictures?" You be the judge.

The prostate, or turn your head and cough 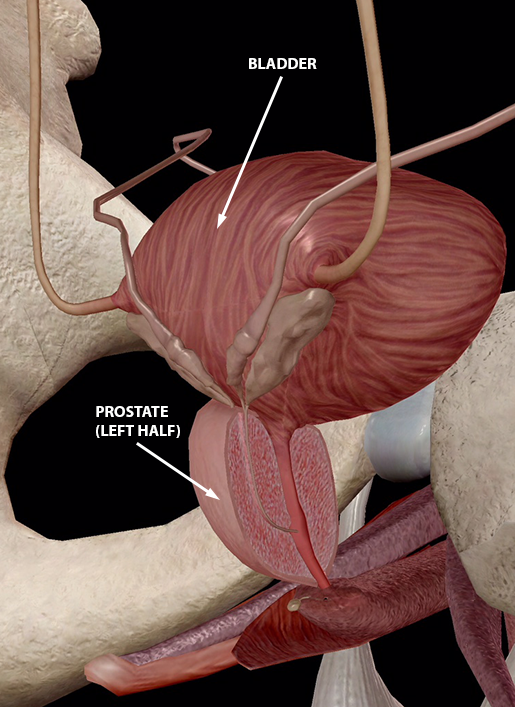 If you honestly think I wasn't going to slip in a clichéd joke somewhere in this post, then you haven't been paying attention.

It seems the only time you ever hear anyone talk about the prostate is in conjunction with cancer, which is morbid and kind of telling about our society these days (we're all a bunch of Debbie-downers). I'm happy to report that, despite reports to the contrary, the prostate isn't a harbinger of disease, but a simple gland. Well, maybe not so simple.

The prostate is a firm muscular gland about the size of a chestnut, located around the internal opening of the urethra and situated in the pelvic cavity. Because of this position, it's palpable (a.k.a. the perineum), especially when enlarged.

Its glandular tissue consists of numerous glands that open into 12 to 20 small excretory ducts, which open into the floor of the prostatic portion of the urethra. That's right: the urethra goes though the prostate.

During ejaculation, the prostate produces fluid that contains enzymes and other substances that activate sperm.

Seminal vesicle (which is exactly what it sounds like) 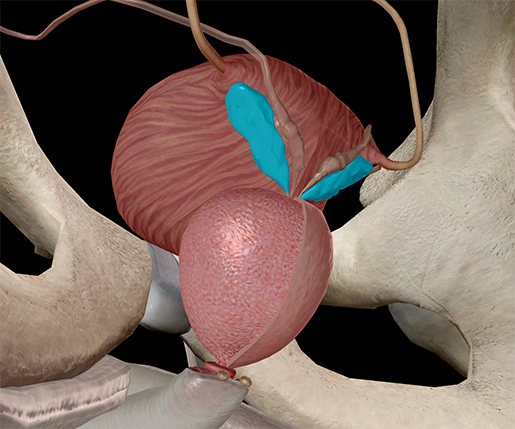 How am I doing so far? Is everyone relatively unscarred and giggle-free?

Okay, so here's something that will blow your mind: the urinary and reproductive systems converge in the male body. In the male system, urine and ejaculate exit the same duct, the urethra, while in the female system they have their own distinctive exits. I explained this to a friend of mine once and she spent the rest of our otherwise mundane conversation with a look on her face that said she wasn't sure what else in her life was a lie.

The male reproductive system has two seminal vesicles, which are sacs, basically. Each ~7.5 cm sac is lined with a mucous membrane, and the cells within the membrane secrete a pale fluid containing sugars, prostaglandins, and other substances. This fluid makes up about two-thirds of semen.

The lower ends of the two vesicles are pointed and converge at the base of the prostate, where each joins with the corresponding vas deferens to form the ejaculatory duct.

Vas deferens, or the waterslide of wonder 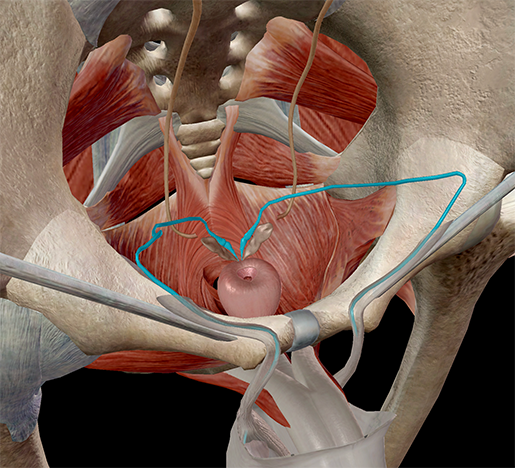 I honestly don't know what that heading is about, but I think it's hilarious. Tell me they don't look like the enclosed waterslides you see at water parks.

The vas deferens, or the ductus deferens, is the excretory duct of the testis. There are two of them (most things come in pairs in the body). The duct lies between the peritoneal membrane and the lateral wall of the pelvis. Eventually, it is directed downward to the base of the prostate, where it joins the base of the seminal vesicle to form the ejaculatory duct.

I really don't have too much to say about the epididymis, other than it has one of the coolest names ever and it basically acts as a way station.

Testis (I'd better not balls this one up—ha-ha, get it? Wink wink, nudge nudge.) 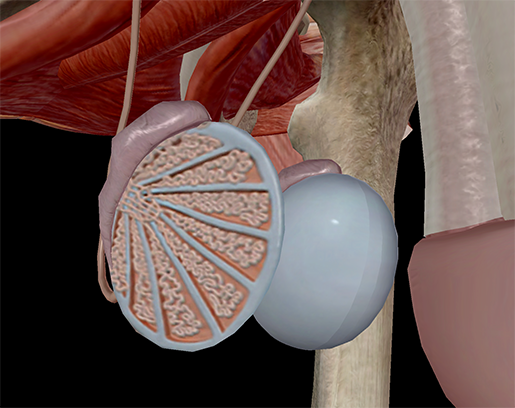 The testis produces male gametes (sperm), which contribute half of the genetic instructions for embryonic development. Testes, like the ovaries, are endocrine glands, and they produce testosterone, which governs early development of the male reproductive system, as well as male secondary sex traits.

Housed inside the tunica vaginalis, a serous membrane, the testis consists of lobules where sperm develop. The testis is suspended in the scrotum by the spermatic cords—each cord consists of vasculature, lymphatic vessels, and nerves (which is why they are so vulnerable to pain, as they are housed in an external structure, and why most athletes in contact sports wear cups).

And there you have it: a rundown of the male internal reproductive system. Now it's back to serious stuff. Stay tuned for our next blog post!