Are you itching to learn about itching?

Everybody itches, but it turns out that the cause of pruritus (the formal term for itching) is more complicated than you might think, with many doctors struggling to treat it. There are many different nerve fibers associated with itching; humans have different pathways for different pruritogens, aka stuff that makes you itch.

We used to think that itch was just a mild form of pain—after all, itching and pain have some things in common. They are both sensations that make you want to get away from the stimulus and induce behaviors to get rid of the feeling, like scratching or running away. However, it turns out that increasing itch does not make it painful, and reducing pain does not cause itching.

Let’s take a look at itching: its basic mechanisms, histamine and non-histamine itches, and the science behind scratching.

How does itch work?

In the past, there have been two main theories about how the itchy feeling gets from the skin to the brain. The first is selectivity theory: some fibers primarily select itching but can also transmit pain, while most fibers only select pain. The second is labeled line theory: itch-specific fibers go from the skin to the dorsal root ganglion, where they interact with itch neurons in the spinal cord.

Now, many researchers believe that both theories are true, that some fibers are itch-only while others transmit itch and pain.

On the molecular level, when a pruritogen touches the skin, it interacts with receptors or ion channels on nerve fibers. For example, in histamine itch, the receptors are G-protein coupled receptors, and the ion channels involved in the itch response are usually transient receptor potential channels. These channels help the itch signal’s journey along the spinal cord and into the brain.

If you’ve been bitten by a mosquito or have walked into a poison ivy patch recently, you’re probably experiencing a histamine-induced itch, the most common kind of itch.

Let’s use the mosquito bite as an example. The bite itself doesn’t do much, but while it’s got its proboscis stuck into your dermis, the mosquito injects saliva, which acts as an anticoagulant to keep the blood from clotting. Humans are allergic to that saliva, so the bite sets off your immune system. Mast cells located in your connective tissue release histamine as an immune response. 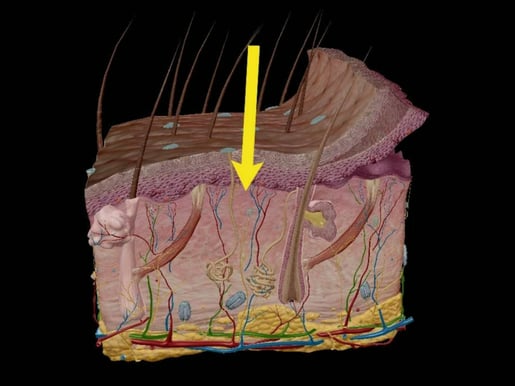 A mosquito's proboscis pierces the epidermis to reach the blood vessels within the dermis. Image from Human Anatomy Atlas 2023 +.

Histamine contributes to many body functions, but in an immune reaction, the most relevant function is increasing dilation and permeability in blood vessels. This allows white blood cells and blood plasma proteins to pass through the vessel walls to attack the antigen.

An antihistamine drug will bind to histamine receptors, preventing histamine from triggering a response.

Now that we’ve discussed histamine itch, let’s talk about everything else. We’ve known about histamine’s relationship to itch since the 1930s, but we don’t have a full understanding of the underlying mechanisms behind other itches.

Let’s take a step back and look at the causes of itch, which can be broken down into four categories:

Systemic itch comes from non-skin organs. Systemic disease can cause skin problems that lead to itching, but it can also cause itching in healthy-looking skin. For example, people with end-stage renal disease can experience itchiness—in fact, 42% of dialysis patients experience moderate-to-extreme itching. This could be for several reasons, like an imbalance of opioid receptors or an increased immune response.

Neuropathic itch comes from damaged nerves that either stimulate itch signals or interfere with itch-inhibiting neurons. About 8% of chronic itch is neuropathic.

Psychogenic itch comes from a psychiatric condition like anxiety or obsessive compulsive disorder. People experiencing psychosis may have delusions involving parasites, leading them to itch.

Those with chronic itch are more likely to have depression and anxiety, but interestingly, some believe that itching may be caused by depression. Like all non-histamine itches, this requires further research.

Almost like a reflex, when we feel the sensation of itch, we want to scratch. It’s thought that humans developed this impulse to remove pruritogens, which makes sense if those pruritogens are insects or parasites. The idea is that when scratching has removed the layer of skin containing the parasite, pain starts, and the scratching stops. 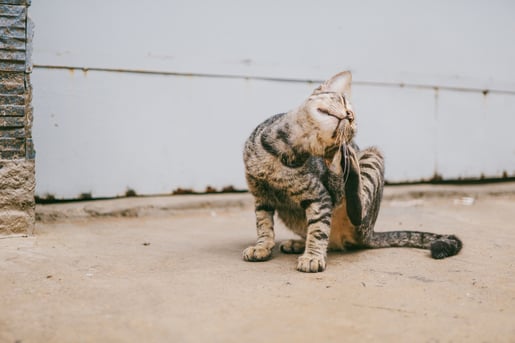 Photo by FOX via Pexels.

Alternatively, we scratch because we would rather feel mild pain than experience itching.

Scratching increases at night because of things like higher skin temperatures due to the circadian rhythm, reduced anti-inflammatory levels, and sleepiness reducing one’s control over the desire to scratch.

Despite what your brain might tell you, scratching doesn’t help itch. It will actually make itching last longer and will damage the skin. This is called the itch-scratch cycle, in which scratching causes short-term relief but long-term harm as it damages skin and leads to further itch.

Research has found that histamine itch can be reduced by scratching… only to return a few minutes later. The neurons begin to fire again after scratching stops.

Itch is temporary in most cases, but for some, it's chronic. Chronic itch is when itching lasts for over six weeks. Chronic itch often needs to be managed separately from the disease that causes it, adding another challenge for doctors. 1 in 5 people will experience chronic itch in their lifetime, so it's even more  important that scientists figure out more about the mechanisms behind itch.

Over the past twenty years, itch research has had several exciting discoveries. For example, in 2013, researchers observed that natriuretic polypeptide B (Nppb), a molecule that helps control blood pressure, is tied to the itch sensation in mice.

Nerves in the skin produce Nppb and use it to communicate the itchy feeling to the spinal cord. Removing the receptors didn’t stop the mice from feeling pain or touch, which means that the itchy Nppb receptors appear to be separate. However, while this successfully eliminated itch from mice, it might not work the same for humans.

There’s still a lot left to discover about how itching is caused and which pathways are associated with different sources of itch so that therapeutics can be developed and there can be relief for people suffering from chronic itch.