A Look Inside the Chloroplast: Organelle Components and Photosynthesis Basics

Open up your refrigerator—all the delicious things you see in there have either relied on photosynthesis or have eaten something that relies on photosynthesis. During photosynthesis, photosynthetic organisms synthesize sugar molecules from sunlight, water, and carbon dioxide. Photosynthesis takes place in the chloroplasts of plant cells, so they’re the reason that plants (and some other organisms) can produce food on their own

What is a chloroplast?

Chloroplasts are filled with chlorophyll, that great green pigment that stains the knees of your jeans if you trip and fall on your lawn. Most algae, and a group of protists called Euglena, also have chloroplasts, and some bacteria (like cyanobacteria) have chlorophyll, but it’s not located in organelles.

The chlorophyll in plants absorbs blue and red light and reflects green. The two most common types of chlorophyll are a and b. Chlorophyll a is in all chloroplasts, and the amount of other chlorophyll types is different depending on the species of plant. 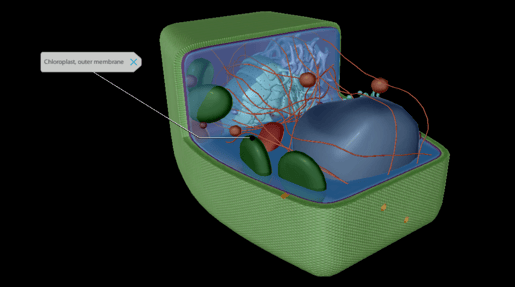 Interestingly, chloroplasts have their own DNA. This is likely because, like mitochondria, they once existed separately from the cell. Chloroplasts were most likely prokaryotic cells that were encompassed by larger eukaryotic cells and evolved into organelles. It’s not a coincidence that chloroplast DNA is small and circular, like bacterial DNA.

There are many chloroplasts throughout the cytoplasm of photosynthetic cells: these cells can have anywhere from one to one hundred chloroplasts that divide to replicate themselves.

Parts of the chloroplast

The chloroplast has three membrane systems: the outer membrane, the inner membrane, and the thylakoid system.

Thylakoids are disc-shaped and collect photons from a light source (usually the sun). They consist of a thylakoid membrane that surrounds the lumen. The lumen is where processes like oxygen evolution, plastocyanin-mediated electron transfer, and photoprotection occur during photosynthesis. Proteins in the lumen contribute to many other processes, including turnover of photosynthetic protein complexes. Thylakoids are arranged in stacks called grana (singular granum). 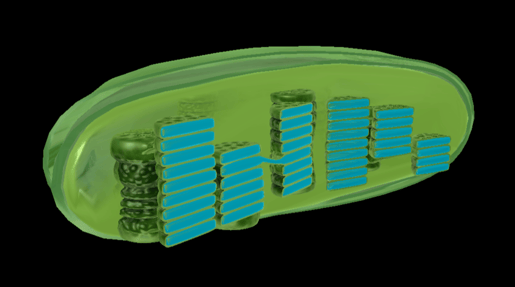 The lumen (highlighted in blue). Image from Visible Biology.

Between the inner membrane and the grana lies the stroma, a thick, protein-rich fluid. This is where the light-independent reactions of photosynthesis take place—but we’ll hear more about that soon!

The basics of photosynthesis

Learn more about what goes in and what comes out of photosynthesis with this Visible Biology Bite.

We’ll give you the run-down on both of these categories.

Light-dependent reactions take place in the thylakoid membrane. In these reactions, the organism absorbs sunlight, breaks down water molecules, puts together ATP and NADPH molecules to store energy, and releases oxygen.

Photosystem II (highlighted in blue), water molecules being broken down, and electrons moving along to photosystem I. Image from Visible Biology.

Once the water molecule has been broken down, it contributes to the building of ATP: its hydrogen ions help the ATP synthase enzyme add a phosphate group to ADP. The leftover oxygen atom combines with another oxygen atom to form O₂, and the oxygen gas is released through openings in the leaves.

Remember that electron that left the chlorophyll molecule? It moves along the thylakoid membrane until it reaches photosystem I. It combines with another excited electron, and an enzyme adds that plus a hydrogen atom to NADP to create NADPH, a molecule that stores energy.

Light-independent reactions (aka the Calvin cycle)

During light-independent reactions, an enzyme combines a molecule of carbon dioxide with a molecule called ribulose biphosphate (RuBP). The resulting 6-carbon molecule is broken down into two 3-carbon molecules. Then, each of those 3-carbon molecules (called 3-phosphoglycerate or 3-PGA) is given a hydrogen atom, creating glyceraldehyde-3-phosphate, aka G3P.

G3P can be used to build sugars—combine two molecules of G3P and what do you get? Glucose!

The Calvin cycle produces twelve G3P molecules: two of those are used for glucose and the other ten are recycled into RuBP. Then the cycle can continue, creating more and more glucose.

Plants use glucose in many different ways. First and foremost, it’s a source of energy. It’s also used to make cellulose, the primary building material of plants. Glucose can also attach to proteins and lipids to make them more soluble.

The chloroplast is a plastid that is made up of an outer membrane, an inner membrane, grana, and the stroma. It’s within the chloroplast that photosynthesis takes place in plants, turning sunlight and carbon dioxide into sugar and oxygen. The chloroplast and the chlorophyll within it are the reason plants can make their own energy without having to consume other organisms.

If you’re interested in learning more about photosynthesis and how it differs from cellular respiration, check out this blog post!