The extraocular muscles of the eye act to move the eye over 100,000 times a day.

Anatomy and Physiology: The Anatomy of Vision 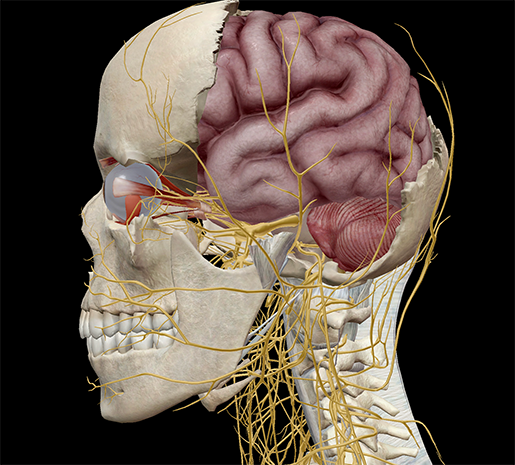 You open your eyes and see the world, but are you conscious of the fact that you are doing so? You saw a link, clicked on it, and now you're reading this blog post. Hello, reader. I like your shirt. Your hair looks really good, too. That you've interpreted what you just saw and have taken it as a compliment is an example of visualization, a.k.a. "Hurrah! You can see things."

Visualization is something we take for granted.  You open your eyes and expect the world to appear around you. Don't lie, you totally do. In fact, you weren't consciously aware you were seeing things until I just reminded you 10 seconds ago.

It's not just your eyes involved in visualization. There is a complicated system in place that allows you to see and interpret your environment. Let's take a look at it.

Like most structures in the body, the orbits of the skull do more than one job. The orbits, or eye sockets as they're more commonly known, give shape to the forehead and eyebrows. They also protect the eyes.

The orbits are made up of the frontal, maxilla, lacrimal, zygomatic, palatine, sphenoid, and ethmoid bones. Within the cavities is fatty tissue that helps keep eye movement nice and smooth.

The eyes are comprised of delicate materials, but are relatively strong (think of anyone who's ever been punched in the eye—the skin around the orbit will bruise, but the eye itself is usually okay). Since only a small portion of the eye is exposed to the world, the orbits act to protect and house the rest of it.

Did you know that your eyes move over 100,000 times a day? The extraocular muscles are the busiest skeletal muscles in your body. 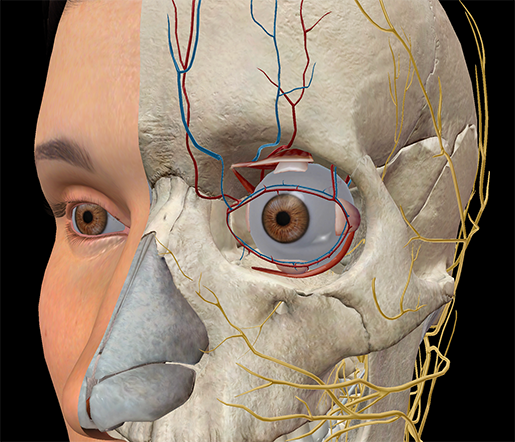 Eyes are beautiful things—they must be, since we're fascinated with them. Throughout history, there have been countless pieces of art, literature, and music dedicated to the no-pair-is-ever-the-same-as-another structures we call eyes.

The reality of them is a little less romantic. The eye isn't a single structure, but composed of many parts, including the retina, cornea, and sclera. The retina is a layer of nervous tissue in the interior of the eye, continuing into the cranium as the optic nerve. The white of the eye is the sclera, and the transparent part of the eye is the cornea. The iris is the pigmented portion (where we determine eye color), and behind the iris is a lens that focuses light to form an image on the retina (remember: the image on the retina is inverted!). Between the cornea and iris is a chamber filled with fluid called the aqueous humor, and between the iris and retina is a chamber filled with fluid called the vitreous humor.

Suddenly Edmund Spenser's "those lamping eyes will deign sometimes to look" from Sonnet 1 doesn't sound nearly as nice when you realize that he's describing the way light refracts off the sclera. Actually, that is almost as nice. Well done, Mr. Spenser.

Passing through the posterior of the eyeball and into the brain is the optic nerve (CN II), a sensory nerve, which continues into the optic chiasm.

The chiasm is an X-shaped structure in which fibers from the optic nerves cross, and information travels from here to the visual cortex (the occipital lobe). 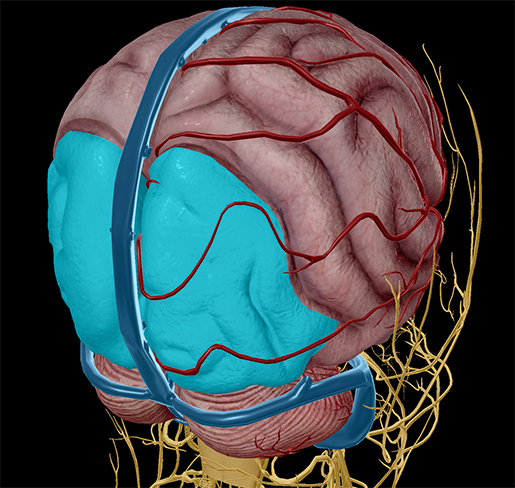 The final leg of the visual journey, so to speak, ends on the completely opposite side from where it began. The occipital lobe is the posteriormost lobe of the cerebrum, and within it is the visual cortex. The primary visual processing center is located on the medial side of the occipital lobe. It's responsible for processing visual perceptions of position, orientation, color, depth, brightness, direction, and speed. Combined, these aspects form complete visual perception.