5 Questions to Help You Distinguish Between Monocot and Dicot Plants

When you think about plants, what is the first thing that pops into your head? Is it flowers? That wouldn’t be too surprising, considering that the largest and most diverse group of organisms in the plant kingdom (with over 260,000 species) is the angiosperms—vascular plants that use flowers and fruits in their reproductive process.

When studying the diversity of angiosperms, you’ll learn about the two main groups, or clades: monocots and dicots (sometimes also referred to as eudicots, or “true dicots”). Monocots and dicots differ from each other in several key ways, which you can learn more about in our Monocot and Dicot Plant Structure unit on the Visible Body Biology Learn Site. Today, we’ll examine these differences by going over five questions you can ask about an angiosperm to help you identify whether it is a monocot or a dicot. We’ll also show you some common examples of monocots and dicots.

Note: There is a third, smaller category of angiosperms called basal angiosperms, or Magnoliidae, which includes magnolia and laurel trees, water lilies, and pepper plants. These plants exhibit traits of both monocots and dicots. We won’t be including them in our monocot and dicot comparisons, but they are worth mentioning!

1. How many cotyledons do the plant's seeds have?

Let’s start by looking at the plant’s seeds. Within the embryo of a plant’s seed, a structure called the cotyledon provides energy and nutrients to the young plant as it grows. Although plants usually make their own food via photosynthesis, they are unable to do so during the early portion of their development. During this time, they get their nutrients from structures like the cotyledon and substances like endosperm within the seed.

You might have noticed that the words monocot, dicot, and cotyledon are similar to each other. This isn’t a coincidence—the names monocot and dicot are based on how many cotyledons each type of plant has! The seeds of monocot plants have a single cotyledon, whereas the seeds of dicot plants have two cotyledons.

Do you like beans or peanuts? When you eat them, you’re chowing down on some very tasty dicot cotyledons! As you can see in the following image, the small protrusion on each peanut half is the rest of the seed’s embryo and the beginnings of its primordial root. The majority of the peanut is a cotyledon, filled with delicious nutrients.

The most prominent and identifiable feature of many angiosperms is their flowers. The appearance of a plant’s flowers is often a good indication of whether that plant is a monocot or a dicot.

If an angiosperm’s flowers have three petals, or flower parts in multiples of three, it’s most likely a monocot. Lilies (plants in the genus Lilium) are good examples—they typically have very prominent flowers with six petals (two groups of three), as shown in the following image.

A Lilium canadense flower. Image from Wikimedia Commons under a Creative Commons 3.0 license.

Pansies are a popular garden flower and a great example of what dicot flowers look like! Usually, dicots have flower parts in groups or multiples of four or five. Pansies, like the ones in the following image, have five-petaled flowers. The colors on this particular plant make them easy to see and count: two purple petals, two white petals, and one large yellow petal at the bottom. 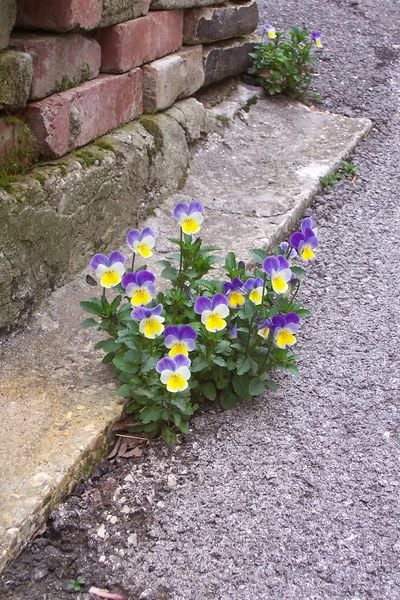 Like flowers, a plant’s leaves are easy to see. Their shape and the pattern of the veins running through them are great sources of information to help you identify whether the plant is a monocot or a dicot.

Monocots tend to have long leaves with striate venation, meaning that the veins run parallel to each other. Like lilies, onions are easily recognizable monocots. In the following image, you can clearly see the Allium crenulatum’s long leaves (and its six-petaled flowers). 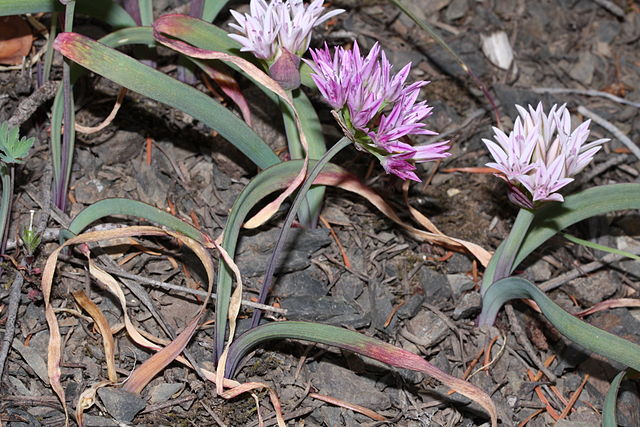 Allium crenulatum, also known as the Olympic onion or scalloped onion. Image from Wikimedia Commons under a Creative Commons 3.0 license.

Monocot leaves have another distinguishing feature—bulliform cells—but you’d need a microscope if you want to see them on a real plant. Bulliform cells are large, bubble-like cells that help the leaf bend or fold, thus changing the leaf’s exposure to light and the amount of water it retains. In the following image, you can see that the bulliform cells are located close to the leaf’s surface, right under the upper epidermis. 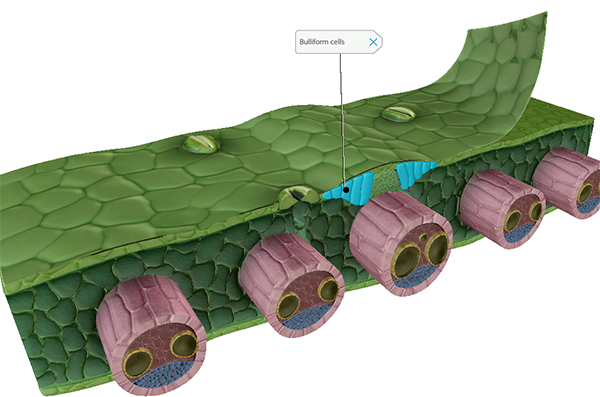 In contrast to monocot leaves’ striate vein pattern, dicot leaves have net-like, or reticulate, venation. There are two basic layouts for reticulate venation. A dicot leaf can have a pinnate (or feather-like) pattern, with a central vein running down the middle of the leaf and other veins branching off to either side of it. Alternatively, it can have a palmate pattern, with veins branching out from a single vein to form a shape resembling the palm of a hand.

Fig trees—plants in the genus Ficus—have leaves with a pinnate venation pattern. In the following image, you can see how the leaves of the Ficus elastica and Ficus lutea have a main central vein with other, smaller veins branching off of it at various points along the length of the leaf. 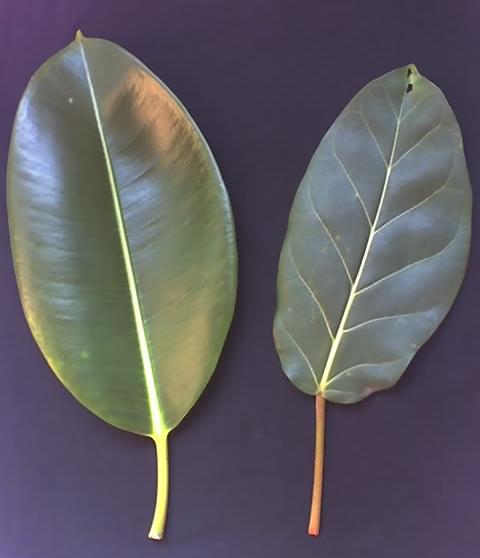 Hedera helix, or English ivy, is a dicot that has leaves with a palmate venation pattern. In the following image, you can see that although each leaf has smaller vein branches further from its base, the main veins originate from the bottom of the leaf and extend out.

4. Does the plant have fibrous roots or a taproot?

Unlike leaves and flowers, which are visible from just looking at a plant in its natural habitat, roots are usually not immediately observable. However, if the plant sample you’re examining has been pulled out of the soil, roots are a feature that can help you distinguish between monocots and dicots.

Monocot roots tend to be fibrous and close to the surface of the soil. For example, royal palm trees, like the one in the following image, are monocots with many (relatively) thin roots that sit close to the soil’s surface.

Dicots tend to have a single thick root, or taproot, that grows deep into the soil and has lateral branches. The following illustration, from Elizabeth Blackwell’s 1757 Herbarium Blackwellianum, shows the parts of a dandelion, which is a dicot. On the far left edge of the image, you can clearly see the large central root and its smaller lateral branches. 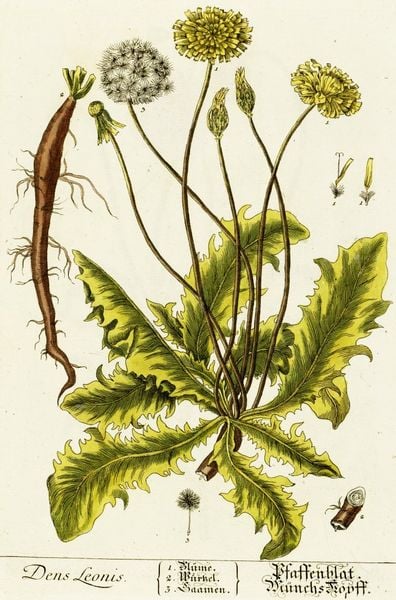 Dandelion illustration by Elizabeth Blackwell (1757). This image was accessed via Wikimedia Commons and is in the public domain.

Another familiar (and tasty) dicot is the carrot. In carrots, the central taproot (the part we eat) is used to store food for the plant. If you’re not a carrot fan, there are many other dicots with edible taproots, including sugar beets, turnips, radishes, and parsnips. 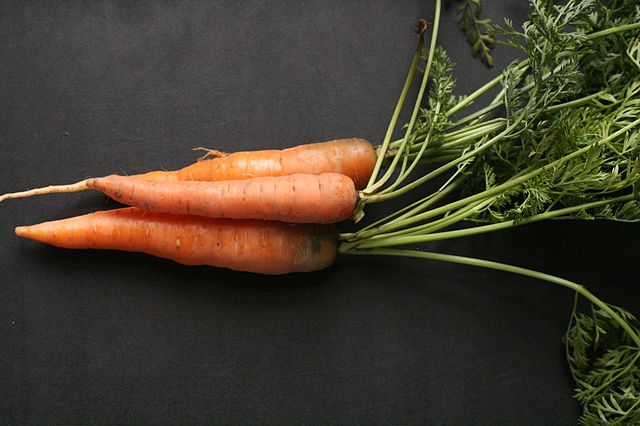 Carrots! Image from Wikimedia Commons under a Creative Commons 2.0 license.

5. How are vascular tissues arranged in the plant's stem?

Vascular plants have two types of tube-shaped vascular structures—phloem and xylem—arranged in bundles. Negative pressure pushes water and dissolved minerals up through the xylem, bringing the materials needed for photosynthesis to the stem and leaves. Dissolved sugars and organic compounds (essentially, the products of photosynthesis) move through the phloem to parts of the plant where they can be stored for later use.

In the following image of a monocot plant stem, you can see that the bundles of phloem and xylem are scattered throughout the stem’s interior, surrounded and separated from each other by ground tissue.

And there you have it—five questions to help you figure out whether a plant is a monocot or a dicot.

Before we go, here’s a handy chart that highlights the main differences between monocot and dicot plants:

For more 3D models and info about the structure of monocot and dicot roots, stems, and leaves, check out the Biology Learn Site!