Did you know that in addition to being Alzheimer’s and Brain Awareness Month, June is Aphasia Awareness Month as well? Aphasia is a language disorder affecting around 2 million people in the US. It results from damage to the brain, and it impairs an individual’s ability to use expressive language (speaking or writing) and/or receptive language (listening or reading).

Today, we’re going to expand on what we’ve already discussed about aphasia on the Visible Body blog, bringing you five important facts about this common communication disorder.

1. Aphasia can have a number of causes, but they all involve damage to areas of the brain that deal with language.

People can also suffer from a transient ischemic attack (TIA), or “mini-stroke,” which involves the temporary blockage of a blood vessel in the brain. In general, stroke leads to brain damage because when brain tissue can’t get the blood it needs, it becomes starved of oxygen, and brain cells die.

Traumatic brain injury, or TBI, can also lead to damage that causes aphasia. TBI is a broad term, covering brain injuries of varying levels of severity. Injury to the brain can result from sudden force causing the brain to shift inside the skull (concussion), the head hitting a hard surface or object, or from an object piercing the skull and directly damaging brain tissue.

A concussion is a form of traumatic brain injury that can result from a sports injury.

Other potential causes of aphasia include brain tumors and degenerative diseases.

When damage from any of these sources occurs to particular areas of the brain—especially Broca’s area (Brodmann areas 44 and 45) or Wernicke’s area (part of Brodmann area 22)—this can cause aphasia.

The American Stroke Association also lists the primary sensory and motor cortices, the primary auditory cortex, and the primary visual cortex as sites where damage may also lead to aphasia, especially if the damage occurs to these areas on the left side of the brain. 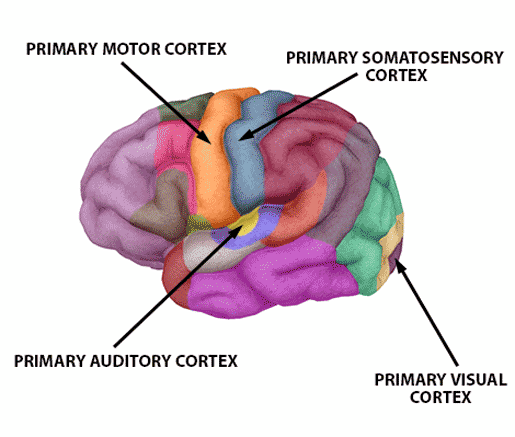 Sensory and motor areas are important for language production and comprehension. Image of functional brain areas from Human Anatomy Atlas.

The specific communication difficulties a person with aphasia has are determined by the area of the brain that has been damaged. Two types of aphasia that relate to damage in specific brain areas are Broca's aphasia (non-fluent aphasia, expressive aphasia) and Wernicke’s aphasia (fluent aphasia, receptive aphasia).

The part of the brain that has been damaged in cases of Broca’s aphasia is a region referred to as Broca’s area. It’s named for a French doctor named Pierre Paul Broca. In 1861, Broca treated a patient, Louis Victor Leborgne, who could only produce the syllable “tan.” After Leborgne’s death, Broca examined his brain and found a lesion in part of the frontal lobe—the left inferior frontal gyrus, or IFG. If you’re familiar with Brodmann areas, Broca’s area makes up Brodmann areas 44 and 45. 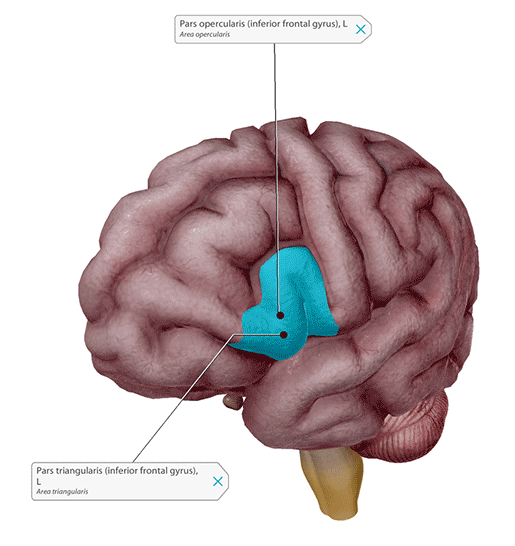 Research in the century and a half since Broca’s discoveries has shown that Broca’s area is associated with stringing words together into sentences, so it makes sense that damage to this area results in the symptoms seen in Broca’s aphasia.

The symptoms of Wernicke’s aphasia are very different from those of Broca’s aphasia. Wernicke’s aphasia is often referred to as fluent aphasia or receptive aphasia because individuals with this type of aphasia can produce continuous sentences at a regular speed with normal prosody. Their sentences often consist of grammatical constructions. However, the sentences may contain made-up words or jargon, and their meaning is often difficult for listeners to understand. People with Wernicke’s aphasia also have trouble understanding what they hear or read.

Wernicke’s aphasia involves damage to an area of the (left) posterior temporal lobe (Brodmann area 22). In the 1870s, a German physician named Carl Wernicke found that there was a connection between lesions in this area of the brain and patients who exhibited symptoms of fluent aphasia. 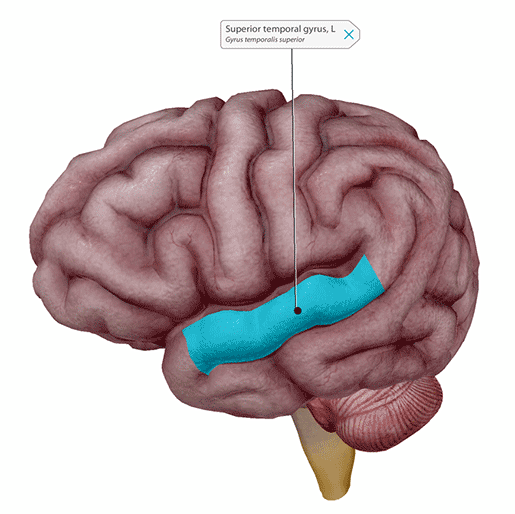 Research has shown that Wernicke’s area plays a key role in connecting words and their meanings. This means that if Wernicke’s area (but not Broca’s area) is damaged, the meaning aspects of a person’s speech will be affected, but they will still be able to put words together into sentences.

3. Global aphasia is caused by damage to multiple language areas in the brain, and primary progressive aphasia involves gradual degradation of brain tissue.

Global aphasia occurs when multiple language-related areas in the brain are damaged. For example, a stroke or injury could cause damage to both Broca’s and Wernicke’s areas. Global aphasia is the most severe form of aphasia, and both expressive and receptive language are greatly impaired—people with global aphasia have difficulty producing grammatical and coherent sentences, and they also have trouble understanding spoken or written language. Usually, individuals with this type of aphasia lose their ability to read and write.

While aphasia is usually caused by damage from a stroke or traumatic brain injury, degenerative brain diseases such as Alzheimer’s Disease or Frontotemporal Lobar Degeneration can lead to a form of aphasia called Primary Progressive Aphasia, or PPA. The language impairment(s) caused by PPA can vary depending on the specific area(s) of tissue that are affected, but in general, the symptoms worsen over time as more and more brain tissue atrophies. Treatment for PPA is focused on slowing the progression of the disease and helping patients adapt as communication becomes more and more difficult. Unfortunately, as with Alzheimer’s Disease, there is not a cure for PPA.

4. Aphasia is distinct from apraxia.

Remember that in cases of aphasia, the function of muscles that produce speech is generally not affected—instead, aphasia deals with the cognitive and computational processes of language.

5. Individuals with aphasia work with speech-language pathologists to help restore communication, but the role of family and friends is important to recovery as well.

Speech-language pathologists can help people with aphasia recover their language abilities and communication skills. It’s usually best to start speech therapy as soon as possible after diagnosis. According to Jefferson Health, “8-10 hours of treatment per week has been shown to improve a patient’s progress, compared to those not receiving consistent treatment.”

There are many ways for the family and friends of people with aphasia to provide support as well. First, involve your friend or family member with aphasia in conversation! Although communicating may be difficult for individuals with aphasia, it’s important for their recovery that they engage in conversation.

Finishing sentences for a person with aphasia might seem tempting, but it’s usually better to wait and let them complete what they’re saying. However, asking clarifying questions and giving confirmation is often helpful.

You don’t necessarily need to speak more loudly to people with aphasia, since they can hear just fine in most cases. Clarity—speaking in short, direct sentences—does help. In addition, try to talk one-on-one and minimize background distractions and noise.

Drawing pictures or writing down information can also be beneficial, so it’s a good idea to have  paper and a writing implement on hand. You can even make a card or collection of cards with frequently-used pictures on them to assist with communication.

Want to learn more about aphasia or how you can find or give support to folks with aphasia? The National Aphasia Association or the American Stroke Association are good places to start.