There are 33 vertebrae in your vertebral column. Or is it 24? Doesn't matter—both numbers are correct. You're born with 33, but the sacrum and coccyx fuse to the rest of the spine, making it 24 by the time you're an adult.

Of those 24 (not counting the sacrum and coccyx), two vertebrae are fortunate enough to have names. The atlas (C01) and axis (C02) are two of the most important vertebrae in the spine. Without them, head and neck movement would be impossible. The atlas and axis vertebrae are the two most superior bones in the vertebral column, and they are part of the seven cervical vertebrae. The atlas is the top-most bone, sitting just below the skull; it is followed by the axis. Together, they support the skull, facilitate neck movement, and protect the spinal cord. (Think of them as BFFs—you won't find one without the other.)

Unlike the other vertebrae, the atlas does not have a spinous process. Instead, it is ringlike and consists of an anterior and posterior arch, as well as two lateral masses. The transverse processes (the protrusions of bone on either side of the ring) serve as the attachment sites of muscles that assist in rotating the head. The foramina (the holes) give passage to the vertebral artery and vertebral vein.

The axis is somewhat analogous to the other cervical vertebrae in shape, but it differs slightly for two reasons: its spinous process isn't as obviously bifid, and the presence of the dens. The spinous process serves as the attachment site for many muscles of the spine, particularly those close to the skull, as well as the nuchal ligament. 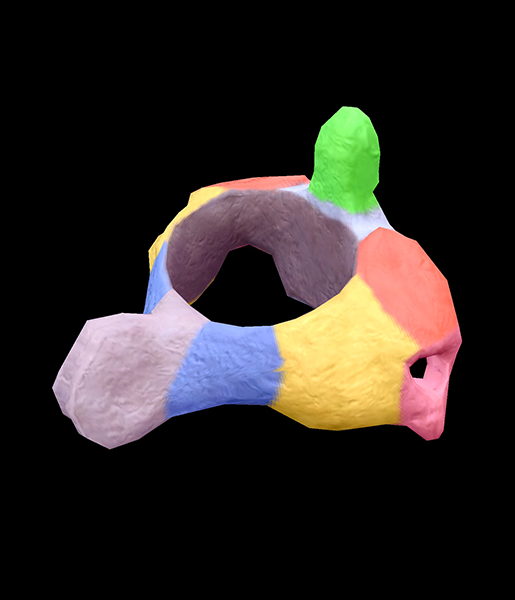 The dens (above, in green), or odontoid process, is a toothlike projection of bone that rises perpendicularly from the upper surface of the body of the axis. Its purpose is very important, but I'll get to that later.

It is also a pivot joint. A pivot joint is made by the end of one articulating bone rotating in a ring formed by another bone and its ligaments. Think of a metal washer twisting around a bolt. The dens articulates with the facet on the atlas, as well as the transverse ligament, and this articulation provides the head with approximately 50% of its movement.

A pivot joint in action. Video from A&P 6.