As 2022 comes to a close, let’s talk about five health news stories that broke this year!

You might recognize mpox from its old name, monkeypox. In November, the World Health Organization recommended a name change to avoid stigma, pointing out that human mpox was first named in 1970, long before modern disease name guidelines.

The virus itself was first discovered in captive monkeys in 1958, hence the name, though rodents are the major carriers of the disease, which causes symptoms including body ache, fever, and fluid-filled blisters on the hands and feet.

Mpox is not a new disease, and it’s endemic in west and central Africa. So why did it make headlines this year? Mpox cases began popping up in countries in North America and Europe. Typically when this happens, it’s because someone has traveled to a country where it’s endemic, caught mpox from an animal, and then returned to the non-endemic country. It isn’t common for a person to transmit the mpox to another person, but this year, mpox began to spread mostly through male-to-male sexual contact.

Image of the mpox viron from the CDC Public Health Image Library.

As of December 9th, there have been 82,522 confirmed cases of mpox reported in 110 countries. It has led to 65 deaths worldwide. The outbreak peaked in August, and plummeted by 90% by December.

Why the drop? Researchers have several ideas, including

Because of the decrease in cases, mpox will not be renewed as a public health emergency in the United States, after January 21, 2023.

The first statin hit the market in 1987, and ever since, statins have been the first line of defense for people at risk of heart attack or stroke. Statin medications reduce the fatty deposits in arteries, reducing the amount of “bad” cholesterol the body makes.

But how do statins stack up against supplements that may also decrease bad cholesterol?

In a study run by the Cleveland Clinic and published this year in the Journal of the American College of Cardiology, researchers looked at 190 adults from the ages of 40-70. One group of participants took a daily dose of rosuvastatin, which you might recognize from its brand name, Crestor. Other participants took either a placebo or supplements like fish oil, red yeast rice, and garlic. These supplements are often sold as natural ways to lower cholesterol.

After 28 days, the researchers looked at the participants’ levels of LDL cholesterol, the “bad” type of cholesterol that negatively affects cardiovascular health by contributing to a buildup of plaque in artery walls. 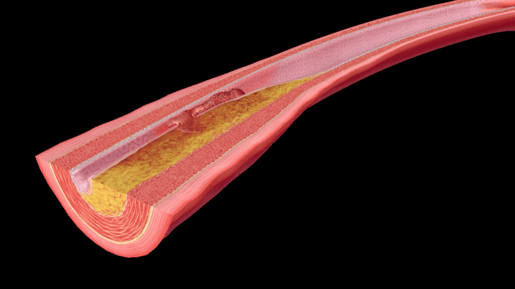 Atherosclerosis is the hardening of arteries due to plaque. Image from the interactive atherosclerosis model in Physiology & Pathology.

This study reinforced that statins are the gold standard for treating high cholesterol.

Researchers have used gene editing to tell T-cells to find and destroy mutated proteins in tumors. Using CRISPR, the researchers made personalized treatments for sixteen people with cancer.

This was no easy feat—one of the study’s co-authors called it “tremendously complicated.”

T-cells are a type of white blood cell that focuses on foreign particles in the body. Using engineered T-cells to treat cancer is not new—the method has been approved to treat certain blood and lymph cancers—but solid tumors are a challenge, in part because every person with a tumor requires custom-designed T-cells.

For every person in the trial, researchers sequenced DNA from tumor biopsies and blood samples, looking for mutations in the tumor but not in the blood. Then, they used algorithms to predict which of the mutations were most likely to trigger a response in T-cells, and they designed T-cell receptors that recognize those mutations. Using CRISPR, the researchers inserted the receptors into the participants’ T-cells.

One month later, five of the sixteen participants experienced zero tumor growth, and only two experienced side effects.

That might not sound impressive, but the researchers say that they started small on purpose, using small doses of T-cells to make sure the process was safe. From here, they hope to further develop this technique.

Human African Trypanosomiasis, aka sleeping sickness, is a serious infection with high morbidity and mortality rates, but a new drug could help eliminate the disease entirely.

Sleeping sickness is a parasitic infection spread by the tsetse fly of west Africa and is endemic in 36 countries. It has two main stages: in the first stage, patients might experience symptoms like headache, fatigue, fever, and weakness. In the second stage, the disease spreads to the central nervous system, and the day/night sleep cycle is reversed. Patients in the second stage experience signs and symptoms that range from hallucinations, itching, and tremors to seizures and coma.

The current treatment for sleeping sickness is the drug fexinidazole, which is 91% effective. It must be taken under medical supervision for ten days with food. The new drug, acoziborole, only requires one dose.

The Drugs for Neglected Diseases Institute tested acoziborole’s effectiveness on 208 people from the Democratic Republic of the Congo and Guinea. More than 75% of the people in the trial had late stage sleeping sickness; the parasite was found in their cerebrospinal fluid. The other 25% were in early to intermediate stages of sleeping sickness.

The oldest virus ever revived from permafrost

You have nothing to fear from the pandoravirus because it only infects amoebas, but as professor of medicine Dr. Paul Hunter points out in his article for The Conversation, other pathogens in permafrost can be more of a threat. As climate change melts permafrost, more dangerous pathogens could be released.

Take, for example, the anthrax outbreak in Siberia in 2016, where dozens were hospitalized and a twelve-year-old boy died. The outbreak was likely caused when unusually high temperatures thawed a decades-old reindeer carcass that had been infected with anthrax and frozen in the permafrost. When the ice melted, the anthrax spread and infected more reindeer. 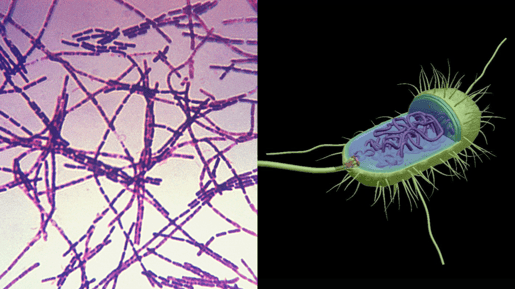 “Zombie viruses” like the revived pandoravirus are more likely to infect animal populations than create a human pandemic, but nonetheless, studying the pathogens in permafrost can give researchers a better idea of what to expect as the permafrost thaws.

The team at Visible Body wishes you a happy and healthy new year! We look forward to advancements in science to come in 2023.