Today, we’re going to take a close look at the human body. I mean a really close look. That’s right—we’re talking about cells! More specifically, we’re going to talk about how materials (water, oxygen, and sodium and potassium ions, for example) get in and out of your body’s cells via passive and active transport.

One of the things the various types of cells in your body have in common is that they are surrounded by plasma membranes.

Plasma membranes contain lipids, proteins, and carbohydrates (which are attached to particular lipids and proteins, making them into glycolipids and glycoproteins).

Phospholipids are one of the major players here. They form the phospholipid bilayer characteristic of biological membranes. Phospholipids have hydrophilic (water-loving) heads and hydrophobic (water-fearing) tails, which means they arrange themselves so that the heads face outwards (where there’s more water) and the tails face inwards. If you put a bunch of phospholipids in water, they’ll form this type of structure on their own. 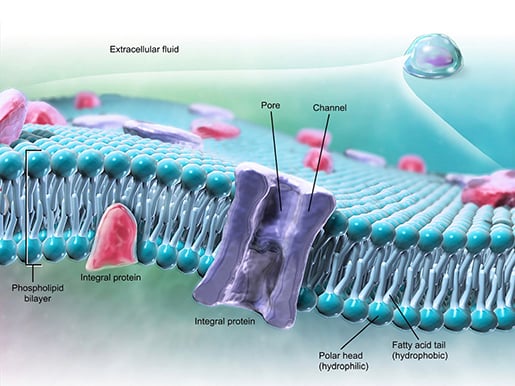 The structure of a cell’s plasma membrane. Image from A&P 6.

Proteins are also an important component of cell membranes. Proteins of the cell membrane can serve as receptors and enzymes. They can also mark a cell’s identity or bind one cell to another. Most importantly for our discussion, transmembrane proteins like channel proteins function like tunnels that allow molecules to get across the cell membrane.

Some materials, like water and oxygen, can enter and leave cells without the cell needing to expend any energy. This is passive transport.

There are a number of factors that can affect the rate of diffusion.

When water diffuses across a cell membrane, that’s called osmosis. Specialized channels in the cell membrane, called aquaporins, specifically allow water to flow in and out of cells. The direction in which osmosis takes place (in or out of a cell) depends on the concentration of the solution the cell is immersed in.

Let’s use a red blood cell as an example.

Normal blood is isotonic to the RBC's cytoplasm, meaning that the concentration of water is the same inside the cell and outside of it. The intake and output of water is balanced and all is harmonious.

If an RBC is immersed in a hypotonic solution, like distilled water, water will rush into the cell and it will swell (and burst!). What this means is that there’s a higher concentration of water (compared to solutes) outside the cell than there is inside, and water flows into the cell.

In a hypertonic solution such as 2% NaCl (salt water), on the other hand, an RBC will shrivel up like a microscopic raisin. This is because there’s a higher solute to water ratio outside the cell, so water rushes out of the cell to try to restore balance to the Force.

In carrier-mediated active transport, a protein in the plasma membrane serves as a carrier for molecules moving in and out of the cell. A classic example is a sodium-potassium (Na+–K+) pump, which moves both types of ions against the concentration gradient.

Basically, the way one of these works is that 3 sodium ions (Na+) from inside the cell bind to a carrier protein in the cell membrane. Then, an ATP molecule is broken down by an enzyme called sodium-potassium-ATPase, releasing energy and causing the protein to change shape, pushing the Na+ ions out of the cell. Then, 2 K+ ions from outside the cell bind to the protein and it changes shape again, depositing the K+ into the cell.

Carrier-mediated passive transport is possible also—it’s called facilitated diffusion. Much like in the sodium-potassium pump example, the material being moved binds to the carrier protein, the carrier changes shape, and the material is released onto the other side of the membrane. There just isn’t any ATP required, since the material is being moved down its concentration gradient. 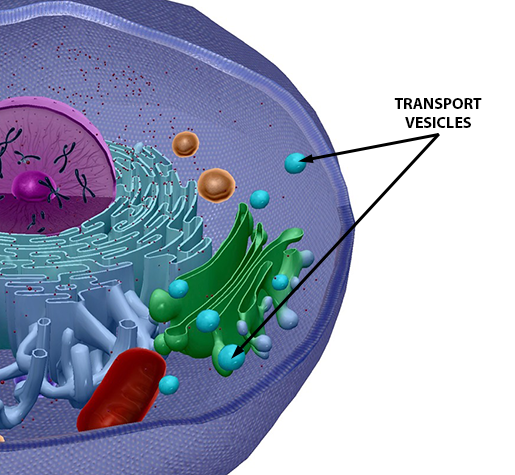 Phagocytosis is my personal favorite because it’s the most dramatic (phagocytosis literally means “cell eating”). A good example of this in the human body is when a white blood cell such as a neutrophil or a macrophage engulfs a bacterium. The WBC surrounds the bacterium and forms a vesicle called a phagosome to hold it inside. Then, a lysosome merges with the phagosome and lends a hand by destroying the bacterium with enzymes. The waste material is released via exocytosis.

Pinocytosis (“cell drinking”) is when the plasma membrane pinches inwards to form a vesicle around extracellular fluid containing useful molecules. This process may not be as flashy as phagocytosis, but it occurs in all of the body’s cells, not just in specialized ones like macrophages and neutrophils.

Receptor-mediated endocytosis is similar in that part of the plasma membrane forms a vesicle around the molecules being taken in by the cell. However, these molecules bind to receptors on the outside of the membrane first, and the vesicle that forms is surrounded by a special protein called clathrin. The endothelial cells lining the blood vessels take in LDL (low-density lipoproteins) in this way.

And now you know the “ins and outs” of passive and active transport! Also, if you’re thinking of starting a band, you should definitely name it Phospholipid Bilayer.