The Year in Review: 5(ish) Awesome Medical Breakthroughs of 2018

2018 is rapidly coming to a close, and that means we’ll soon be counting down the seconds to a brand new year. Not to be outdone by the festivities in Times Square, we’re going to do a countdown of our own here at Visible Body, looking back at this year’s important medical research news.

So sit back, relax, and let’s revisit some of the most exciting stories 2018 had to offer (please hold the singing of Auld Lang Syne and drinking of champagne until the end of the article)!

If you’ve ever watched Star Trek, you might have noticed that they don’t use syringes to administer injections in sickbay. Instead, they use a device that looks like the one in the picture below. What if I told you that the hypospray isn’t just science fiction?

Researchers at Portal Instruments, a startup founded by MIT professor Ian Hunter and his student Patrick Anquetil in 2012, are working with Takeda Pharmeceutical Company on developing and commercializing a device called PRIME. Instead of using a needle, PRIME uses a focused jet of liquid to get medicine directly under the skin. This liquid leaves the nozzle at about Mach 0.7 — almost as fast as an actual jet. Also, PRIME can be connected to a phone app. You can see an image of PRIME here.

Another exciting piece of biotechnology is the Theraoptix contact lens, developed by a team from Harvard Medical School, which was the recipient of this year’s MIT Sloan Healthcare Innovations Prize. At the center of the Theraoptix lens is a small circular strip of polymer film that allows for sustained release of medications that can continue for up to two weeks. What does this mean for patients with conditions such as glaucoma, macular degeneration, or diabetic retinopathy? Fewer inconvenient eye drops and trips to the doctor’s office for injections.

Spinal implants that utilize electrical signals are providing mobility and newfound hope to individuals whose doctors said they would never walk again. In certain types of spinal cord injuries, the communication pathway between the brain and the muscles of the legs is impeded. Electrical signals can be applied to help reinstate that communication.

A team led by Dr. Grégoire Courtine at École Polytechnique Fédérale de Lausanne (EPFL) in Switzerland helped 30-year-old David M’zee take his first steps after a sports injury left him unable to walk. The device developed by Courtine and his colleagues transmitted electrical signals that augmented the ones struggling to travel between the brain and legs via the spinal cord.

Dr. Jocelyne Bloch from Lausanne University Hospital performed the implantation surgery, and afterward, everyone involved was encouraged by the amount of improvement they saw in David’s condition. Before the implant, David was not able to walk at all. Now he can take around eight steps with the implant turned off, and he can walk for about half a mile with it turned on. The implant also appeared to aid in the repair of neural fibers in David’s spine — something which was unexpected for a chronic condition.

Two additional patients, Gertjan Oskan (35) and Sebastian Tobler (48), also regained some measure of mobility after treatment. The implant is still in its earliest stages of clinical testing, so patients like David, Gertjan, and Sebastian can’t wear it daily. Still, the technology provides a promising avenue of potential treatment for patients with spinal injuries.

You can read the BBC's report on these implants here.

Let’s take a moment to appreciate how amazing stem cells are on their own. They are our body’s way of generating new cells to form and repair key organs and tissues in the body. They start out unspecialized and proliferate (that is, make more of themselves by cell division) and specialize (differentiate) in response to particular biological triggers. Stem cells are of one of two types: embryonic or somatic (adult). Embryonic stem cells are responsible for forming essentially all types of tissue as the body develops in the womb, whereas somatic stem cells are found throughout the adult body and replenish cells and tissues as necessary.

One of the most important uses for stem cells in research is to cultivate certain types of tissue — even whole organs — in the lab. Earlier this year, researchers from the University of Texas Medical Branch (UTMB) successfully completed the transplant of a bioengineered pig lung. Their technique used the recipient’s own cells to minimize the risk of rejection. First, they created a “scaffold” by stripping the tissue of the donor lung down to a layer of proteins. They then placed the proto-lung into a bioreactor along with growth-factor molecules and stem cells from the lung’s future recipient. Ultimately, the bioreactor created the correct environment to stimulate the growth of the proper cell types. Check out an image of the bioreactor here.

After 30 days, the lung was removed from the bioreactor and the transplant was performed. Routine post-transplant tests showed that lung tissue and blood vessels continued to grow, and at the two-month point, the four recipient pigs had not rejected the bioengineered lungs. In fact, a population of bacteria typically found in healthy lungs took up residence in the new ones.

Because transplant lists for humans are notoriously long — there are many more people who need lung transplants than there are donors — this type of bioengineering could help more patients get the treatment they need for a variety of conditions affecting the lungs (cystic fibrosis, for example). Bioengineered organs aren’t ready for use in humans yet, but researchers are optimistic about the future application of these techniques.

3. The genetics behind metastatic cancer

A new study from researchers at the University of Alberta investigated the genes responsible for the process of metastasis in cancer cells — that is, when cancer spreads from one part of the body to another. They found 11 genes involved in cancer cell motility, and deactivating these genes could stop 99.5% of metastasis in living cells from occurring. You can read the full study here.

To find their target genes for testing, the team conducted a genome-wide screening utilizing a shRNA library. Essentially, this technique uses a lentivirus to deliver small segments of RNA into cells. These pieces of RNA bind to regions of DNA and prevent the activation of particular segments of the cell’s genetic code (you can think of shRNA as “shh”RNA because they keep a gene quiet).

The cells were then inserted into avian embryos ex ovo (without the egg) and monitored as colonies formed. The researchers identified their target genes for further study by analyzing the  genotypes of non-metastatic colonies and determining which genes had been affected by shRNA in the cells of those colonies. From there, they cloned cells from the non-metastatic colonies and monitored their growth to see what effect target genes had on the populations of cells.

Ultimately, 11 genes were implicated in metastasis as a result of this study. Some were already known to affect cell migration, but other genes and non-coding RNAs had not been associated with such processes before. The top target identified was KIF3B, which was linked to the transportation of molecules key to cancer cells’ interaction with collagen fibers as they invade tissue.

Studies like this one have such a profound impact because metastasis is responsible for a huge percentage of cancer deaths. Hopefully, this research will pave the way for stopping metastasis in its tracks with gene therapy in humans.

Back in January, 26-year-old Cameron Underwood underwent a full face transplant procedure at NYU’s Langone Medical Center. An accidental gunshot wound had left Cameron with significant damage to the lower portion of his face and significantly impaired speech, mouth function, and eyesight. Eleven months later, the success of the procedure is clear. Cameron has even gone skydiving (that’s right — only months after this transplant, Cameron jumped out of a plane!).

The surgery, performed by Dr. Eduardo Rodriguez and his team, took 25 hours. This is markedly shorter than the team’s first face transplant, which lasted more than 36 hours. The reduced time spent in surgery is a significant improvement because the longer the surgery, the more grueling it is for the surgeons and the higher the risks become for the patient.

This video from NYU provides a visual overview of what was replaced and how it was transferred from donor to recipient.

When the procedure was complete, most of the lower part of Cameron’s face (including 32 teeth and gums, as well as his mouth, jaw, nose, lower eyelids, and cheeks) had been reconstructed.Cameron’s recovery time was almost half that of previous patients — he only spent around 37 days in the hospital and a week in rehabilitation.

The doctors were optimistic about how the technology, donor match and selection method, and immunosuppression regimen they used to prevent transplant rejection could improve similar procedures in the future.

This year’s awardees of the Nobel Prize in Medicine were two immunotherapy researchers, James P. Allison (University of Texas) and Tasuku Honjo (Kyoto University). The work of these lauded scientists revolutionized the treatment of multiple types of cancer, from lung cancer to melanoma to Hodgkin’s lymphoma, by providing a way for the body’s immune system to attack cancer cells. 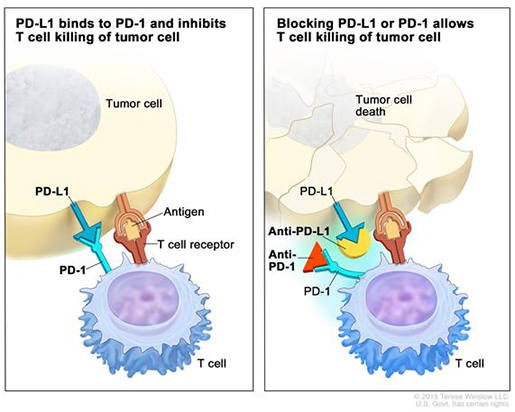 Activating the T-cells can sometimes result in them attacking healthy cells in the body, but in spite of these risks, the benefits of checkpoint inhibitors for fighting cancer are significant. Many patients with previously difficult-to-treat cancers have gone into remission after treatment with these drugs.

All in all, the ingenuity and effort of researchers like Allison and Honjo continue to bring better treatments and brighter outlooks for numerous patients. True to the spirit of the prize they received, their work has changed their field and improved many lives.

Okay, maybe not quite yet, but here’s hoping that there are just as many, if not more, innovations in medicine in 2019 as there were in 2018. With each study that is conducted, we know more than we did before about the human body and how to treat illnesses and injuries.