Rotate the 3D model to see how the trachea extends from the larynx to the level of the fifth thoracic vertebra.

The Wonderful Windpipe: Five Awesome Facts about the Trachea

Guess what? I know what you’re doing right this second. (And no, I don’t have psychic powers.)

You’re breathing! Well, probably. You’re constantly exchanging air between your body and the outside world, and although the lungs are where the actual gas exchange happens, air wouldn’t be able to get to your alveoli without the trachea (aka the windpipe).

In most adults, the trachea is about 11 cm long and 2.5 cm wide, extending from the lower part of the larynx to just above the fifth thoracic vertebra (T05). At that point, it divides to form the right and left primary bronchi. 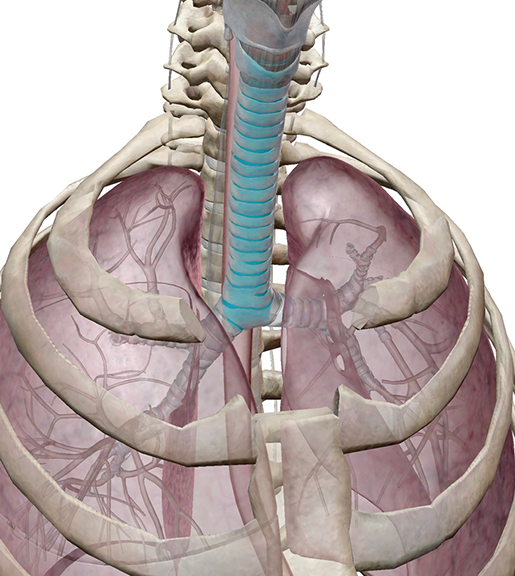 But the trachea is not a simple tube. If we take a closer look, we’ll find a multi-layered lining, smooth muscle that contracts to help us cough, and a whole bunch of mucus. So, the trachea is really quite a complex tube.

1. The trachea is surrounded by c-shaped rings of hyaline cartilage.

There are typically 16–20 cartilaginous rings stacked along the length of the trachea. Their main function is to keep the airway from collapsing (which is important if you intend to breathe).

These rings are composed of flexible hyaline cartilage, which is the most common type of cartilage in the body. It’s found not only in the trachea but also in the joints, the nasal septum, and the ends of the ribs. 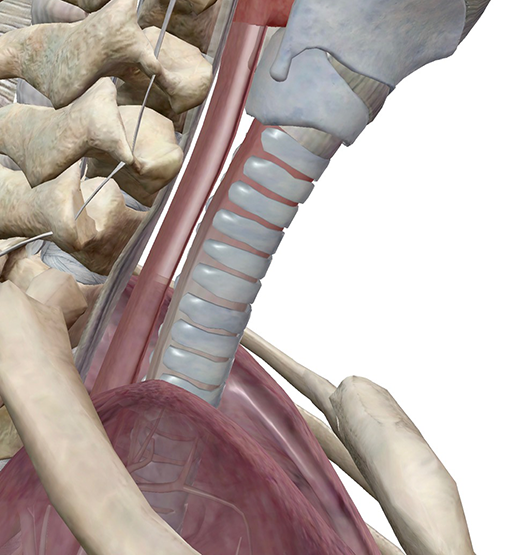 However, the rings only cover the frontal two-thirds of the trachea. Why? The trachea needs to be flexible enough to accommodate food moving through the esophagus, which is located just behind it.

The shape of the cartilaginous rings gives the trachea just the right balance of structure and flexibility it needs to do its job.

2. The trachea contains smooth muscle that aids in coughing.

When your airways are irritated or obstructed, your nervous system sounds the alarm and the cough reflex is triggered, causing muscles to contract in an effort to expel the offending substance or object.

One of the muscles involved is the trachealis, which bridges the gap between the ends of each ring of cartilage. When it contracts, the trachea’s diameter decreases, helping move air out of the lungs with greater force.

Yes, mucus. It’s slimy and gross, but it’s also necessary (in appropriate quantities) to maintain a healthy respiratory tract. Mucus is made mostly of water, but it also contains fats, proteins, and salts in addition to immune cells and special sugar-covered proteins called mucins.

It’s produced by a variety of cells and forms a layer inside the trachea to trap unwanted particles (dust, dirt, pollen, and so on) and microorganisms. When you get sick with a cold or other respiratory illness, your body kicks mucus production into high gear to try to clean out the problem-causing pathogens.

Cilia—tiny projections sticking out from the innermost layer of cells in the trachea—move rhythmically to help push mucus up and out of the trachea so it can be expelled or swallowed. Damage to these cilia is a serious problem. Smoking cigarettes, for example, paralyzes or kills cilia, which leads to coughing as well as more frequent colds and respiratory infections.

4. The lining of the trachea is composed of several layers.

Let’s go through each layer of the lining of the trachea.

Together, the pseudostratified ciliated columnar epithelium (PSCCE) and the lamina propria make up the mucosa.

The PSCCE contains many different types of cells, with the most notable being tall column-shaped cells topped with cilia, as well as goblet cells that secrete mucus. The basement membrane between the epithelium and the lamina propria contains basal cells, which generate new goblet and columnar cells as necessary. Various types of neuroendocrine cells can also be found in the epithelial layer of the mucosa.

The PSCCE layer may look pretty sizeable, but it’s actually only one cell thick—the cells are just really close together and their nuclei are in different positions in different cells. In addition, though all of the cells in the PSCCE are attached to the basement membrane, not all of them are the same height. These crowded-together nuclei and variation in the shape of the cells give the appearance of stratification.

The lamina propria sits below the columnar epithelium. It is made up primarily of loose connective tissue but also contains seromucous glands, immune cells, and capillaries supplying blood to the basement membrane.

The submucosa, like the lamina propria, contains loose connective tissue and seromucous glands. (I told you there was going to be a lot of mucus.) Lymph nodules, autonomic nerve fibers, arterioles, and venules are also present in the submucosa.

The adventitia is the outermost layer, also composed of connective tissue. The trachea’s rings of cartilage sit between it and the submucosa.

5. The carina is a ridge marking the point where the trachea separates into the primary bronchi.

Fun fact! The anatomical term “carina” comes from the Latin word for the keel of a ship or boat (it’s basically a fin-shaped structure that protrudes from the bottom of the ship).

In most people, the carina is located at the level of the T04 vertebra. It sticks up to form a small ridge at the place where the trachea bifurcates.

Now you know the basics of trachea anatomy and histology!

If you want to learn more about the body’s cells and tissues, check out A&P 6 for iOS and Android! It’s got more than 100 full-color slides for you to explore.