When You Gotta Go, You Gotta Go: The Ins and Outs of Urinary System Anatomy and Physiology

I'm going to be straight with you: there are a lot of pee jokes I could have slipped into this post, but being the upstanding person I am (and having a boss who isn't afraid to veto genius) I decided to take the high road. But know that this post could've been golden. (Sorry.)

It's 2017, but we still have a problem talking about the urinary system, which is weird, considering everybody has one and uses it daily. It shouldn't still be taboo to discuss our body's natural waste management system. Maybe it's a bit different for the guys (you get to make friends at the urinal wall!), but in the women's bathroom, we're dead silent in our stalls and when we emerge we act like nothing just happened.

It's time for a frank talk about the urinary system! So grab yourself a drink, take a quick bathroom break, and away we go.

Click here to explore the images from this blog post in 3D using Human Anatomy Atlas 2021 or later!

There are some anatomy heavy hitters working for you in the urinary department, from the kidneys all the way down to the urethra. This is a good thing: you know the feeling of relief you get after you pee? Mixed up with that is the knowledge that your blood is clean. That's right! The waste you eliminate is the stuff that the kidneys cleaned out of your bloodstream.

Okay, let's break it down:

There are four major components in the urinary system.

Like many structures within the body, you've got two of these. The kidneys are bean-shaped organs that hang on the back wall of the abdomen, one on either side of the spinal column, with the right kidney usually slightly lower than the left. They're composed of an external cortex, an internal medulla (in which the renal pyramids are found—we'll get to those in a sec), and a funnel-shaped structure called the renal pelvis.

Nephrons are the basic functional component of the kidneys and make up most of the cortex and medulla. They're composed of a series of arterioles and tubules, which begin in a structure called the renal corpuscle. The nephrons produce urine through the process of removing waste and excess substances from the blood. But how can these tiny units produce the amount of urine you normally evacuate throughout the day? Well, there are a million of them. Per kidney.

A zoomed-in view of a nephron from Human Anatomy Atlas.

The renal pyramids are so named for their conical shape. Urine from the pyramid's nephrons is channeled into the renal pelvis and then into the ureters for collection in the bladder.

I love the renal pelvis. It looks so extraterrestrial. Its main function is as an excretory channel, funneling urine from the kidneys into the ureters. The upper part is located within the kidney's central cavity, the renal sinus.

Long and tubular, the ureters convey urine from the renal pelvis to the bladder. Smooth muscle contracts in the ureter wall to propel urine down. Each ureter measures about 10-11 inches (25-30 cm) and enters the bladder through slit-like openings in the posterolateral (rear) bladder floor.

Think of the bladder like a pufferfish: when it's empty, it's tiny and helpless, until it swells to capacity—at which point it's kind of terrifying. The bladder is an extremely elastic musculomembranous sac that serves as a reservoir for urine. Its size and position are relative to the amount of urine it contains. Empty, it's conical in shape; at medium capacity, it's ovoid; at complete fullness, it balloons out and becomes distended.

Now this is where things get interesting, because the urethra differs slightly depending on whether or not you're working with male or female anatomy. 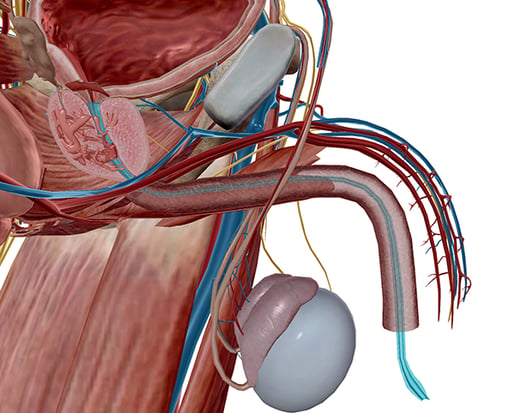 In the male system, the urethra extends from the urethral orifice in the bladder to the urethral meatus at the very end of the penis (an average length of approximately 17.5 to 20 cm or 6-8 in long). It's divided into three parts:

It passes through the urogenital diaphragm and terminates directly in front of the vaginal opening, situated behind the base of the clitoris.

A UTI is caused by bacteria entering the urinary tract through the urethra and then multiplying in the bladder. Women are more likely to get a UTI than men simply because the urethra in the female system is shorter, and thus bacteria has a shorter distance to travel to the bladder than in the male system.

Symptoms of a UTI are commonly:

And sometimes there aren't symptoms at all. In older adults, UTIs can be misdiagnosed as something else altogether.

Treatment usually involves a course of antibiotics that will clear the infection up in a few days. Pain medications may be prescribed with the antibiotics, but an odd side effect of urinary tract analgesics is deep orange or even red urine.


And there you have it: the lowdown on the urinary system in 1,000 words—and only one pee joke. I'm so proud.