That Boom Boom Pow: Virtual Dissection (sort of) of the Human Heart

The heart is a bit ubiquitous. While it's responsible for keeping your body in perfectly oxygenated condition, it's also commonly used as a metaphor and a gauge of one's mettle, and is the subject of about a bajillion soft rock ballads from the 80s and 90s.

I never had the good fortune of dissecting a heart in school. Sheep's brain, yes—as well as a slew of other creatures, including the biggest grasshopper I've ever seen. I asked my teacher where they were from so that I'd never go there ever, but she just smiled enigmatically and began the lesson. I'm pretty sure it was a weta.

If you're like me and still feel cheated out of the satisfaction of a heart dissection well done, then you're in luck! I'm going to peel back the heart layer by layer with Human Anatomy Atlas. Because that's just the kind of heartbreaker I am.

Don't have time to read? Then watch this:

A Silent Guardian, A Watchful Protector: The Pericardium

I don't know about you, but when I first learned about the heart I was downright shocked that no one had told me that the heart basically lives inside a pillowcase. That was important information that I could have used in the 4th grade to gain extra points on our "LABEL THE HUMAN BODY" quiz (but I used it down the road as a mnemonic device in my 9th grade lab).

The pericardium attaches to the central tendon and muscular fibers of the diaphragm, as well as the posterior surface of the sternum, helping it to anchor the heart in place.

The Sternal Coast:
Cardiac Muscle and The Heart Wall

The thing you're probably going to take away from this post is that layers are the lay of the land as far as the heart goes, even when it comes to the most basic component: cardiac muscle.

The heart wall is made of three distinct layers (told you) that help give the heart its shape and size. The outermost layer is epicardium, a visceral layer of serous pericardium; myocardium is the middle layer, made up of muscle fibers attached to fibrous rings; the innermost layer is endocardium, a thin and smooth membrane of connective tissue and elastic fibers that line the inner surface of the heart.

Myocardium is where a good chunk of the magic happens. Blood is distributed in and out of the heart as a result of its signature contractions (ie: your heartbeat), and those muscle contractions—stimulated by the electrical impulses delivered by the conduction system (we'll get there in a little bit)—occur in the myocardium. This is where your heartbeat originates. 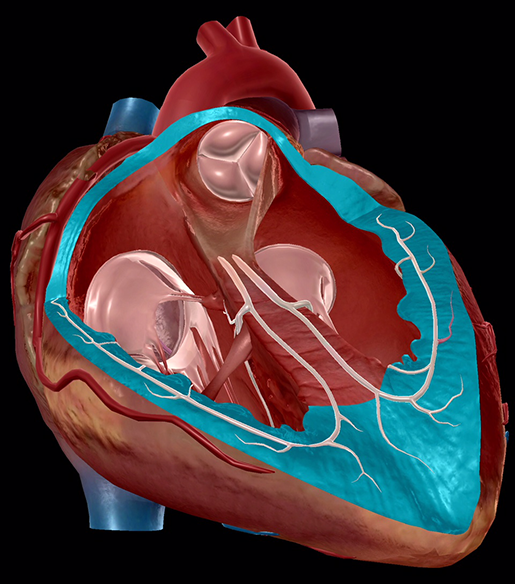 But of course your heart isn't just pumping muscle. There are other important structures within the heart, such as the thick muscular wall that separates the ventricles known as the interventricular septum, and the conus arteriosus, a conical pouch that gives rise to the pulmonary trunk.

Doors and Rooms, Everywhere:
The Heart Valves and Chambers

If you're playing the home game, you may not have known that there are four valves that regulate blood flow—one-way blood flow at that!—in, through, and out of the heart. Varying pressures on either side of the heart cause these valves to open and close, contributing to the process of circulation. There are also four chambers, called atria and ventricles, in which blood flows.

Let's start with the chambers! 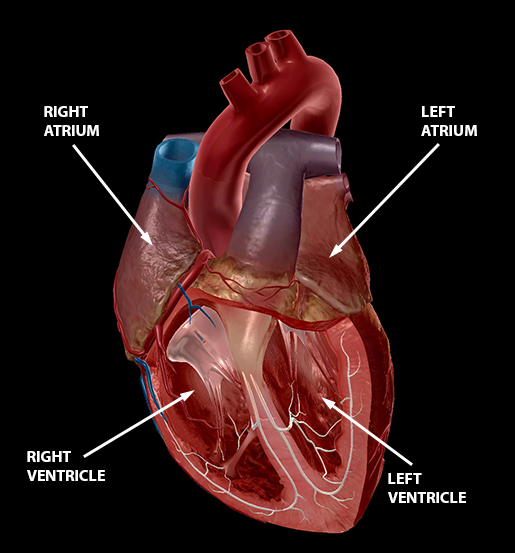 The two upper chambers, seated on top of the heart like little muscular berets, are known as the atria. These are the blood collection chambers. The right atrium receives deoxygenated blood from the vena cavae, two of the great vessels, and the coronal sinus and then empties it into the right ventricle. The left atrium, smaller and thicker than its counterpart, receives oxygenated blood from the pulmonary veins and empties it into the left ventricle.

There are two ventricles—a right and a left—with the same job: pump blood out of the heart. However, depending on the ventricle, the destination of that blood is different. The right ventricle (Ventriculus dexter, which is now what I'm going to call my friend Dex until the day I die) is responsible for pumping deoxygenated blood into the pulmonary trunk. The left ventricle (Ventriculus sinister, which is probably a villain that didn't make it into the Star Wars prequels) pumps oxygenated blood into the aorta, where it's then distributed throughout the body.

Now onto the valves.

Each valve is made up of a group of membranous folds or cusps that open and close during the cardiac cycle. 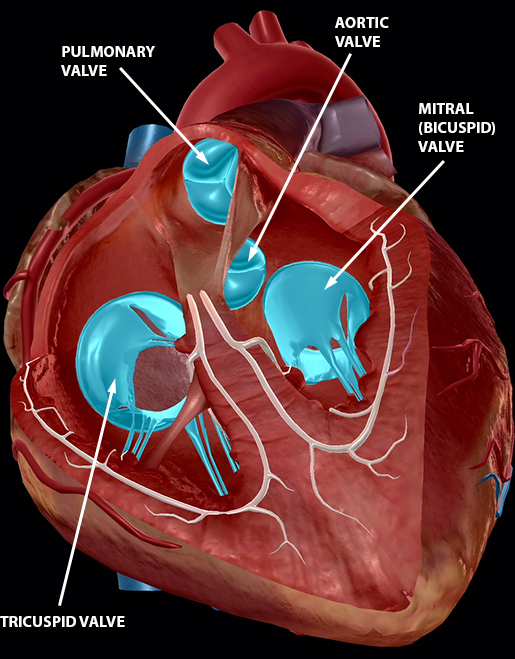 Blood from the left ventricle is delivered into the aorta via the aortic valve. It's a tricuspid valve, formed by three semilunar-shaped cusps that open and close during the cardiac cycle. The cusps are larger and thicker than its pulmonary counterparts. When the ventricles contract (systole), the aortic valve opens and oxygenated blood moves into the aorta. The very moment ventricular systole ceases, the pressure of blood in the aorta closes the valve, preventing backflow into the left ventricle. It's an immediate action that happens constantly.

Goodness Greatness:
The Great Vessels of the Heart

All this blood pumping wouldn't work if there weren't a system in place. That's where the great vessels come in: they act as the relay, just the way your water pipes do! The vessels connect to the heart for pulmonary circulation and to the rest of the cardiovascular system to distribute blood throughout the body. 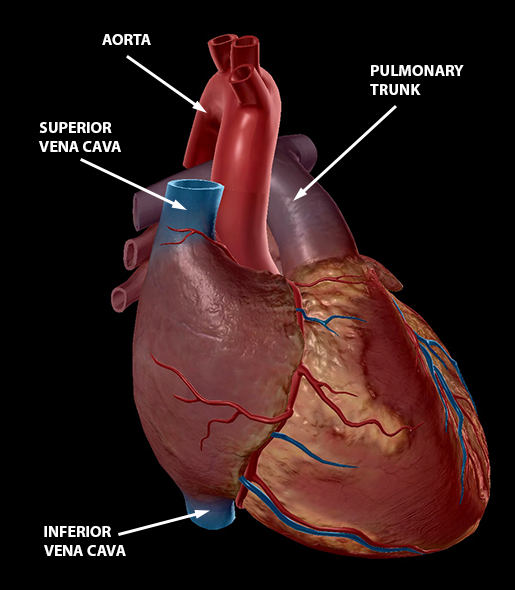 
Conduct Yourself Properly:
The Conduction System

The fact that your heart beats constantly until the day you cease to be is incredible, and it's all thanks to the conduction system, which is exactly what it sounds like: it delivers electric impulses to muscle fibers within the heart and motivates its rhythmic contractions. 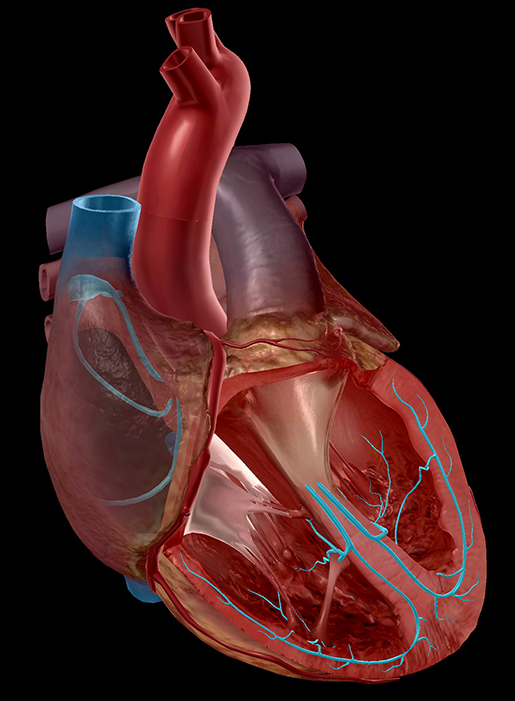 Like any well-working system, there are steps to how normal operation occurs. Here are the steps that the conduction system takes to kick out an electrical impulse:


Put It All Together and
Whaddaya Got?

The human heart is an incredible organ. Yes, it's susceptible to the wear and tear of time and can be host to a bevy of ailments and diseases, but with new technologies innovating how we prolong our lives the heart could, theoretically, keep beating forever. Whether or not the rest of the body can match that is another story.

So there you have it! The human heart in a nutshell.