A Lot on Our Minds: A Virtual Human Brain Dissection with Atlas 2017

The brain is an insanely complex organ. It's the reason you're you. And as I type this, it occurs to me that this post is basically an autobiography—my brain is writing about itself. Isn't that weird? Anatomy is weird.

How many of you have had the good fortune to actually dissect a brain? In a lab setting, I mean. If you were dissecting brains on your own in your kitchen or something, that'd be super weird and I'd be wondering if your name was Hannibal Lecter. I once dissected a cat brain, but that was nowhere near as complex as the human brain, and despite our pleas to our teacher to let us dissect an actual human brain, she was smart enough not to let a group of 9th graders anywhere near one.

As Marius Kwint, curator of the Brains exhibition at the Wellcome Collection in London, once said about brain dissection, "It's pretty intense."

I don't have a brain on me, but I've got the next best thing! With Human Anatomy Atlas 2017, I'm going to do a virtual brain dissection. Sort of. But, again, because the brain is so complex and has so many structures, we're only going to look at some of the outer ones for time purposes.

Don't have the time or inclination to read? Then watch! 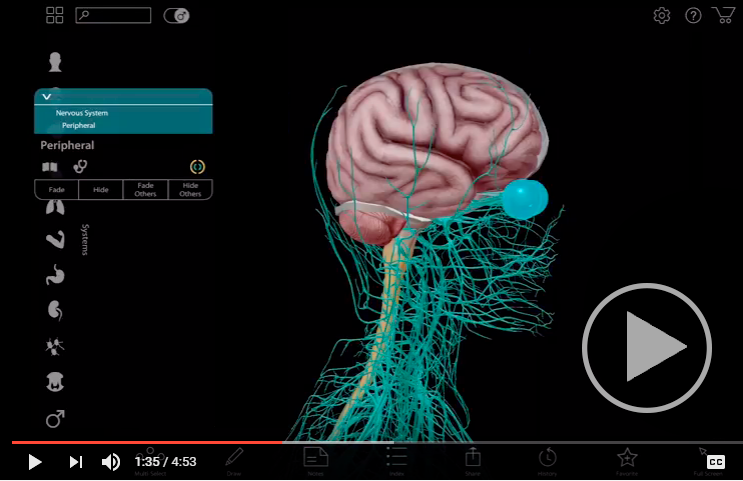 For more Anatomy & Physiology videos check out our YouTube Page.

Otherwise, are you ready for this? Then let's begin!

You wouldn't think that a grayish pink, wrinkly mass that looks like a blobfish would be the key to everything that is you, but that's where the magic happens.

Before we get to the main event, let's take a look at the structures that protect the brain, starting with the skull and spinal column. They're kind of like armor; when you take a hit (while playing a sport or during a car accident), the skull and vertebrae help keep the vulnerable structures of the central nervous system (CNS) from being injured.

But take away the skeleton and there's still another layer of protection, because your body has evolved to do pretty much everything to keep the brain and spinal cord safe.

The meninges are the three layers of connective tissue that surround and protect the brain and spinal cord. Dura mater is the thick outermost layer, lining the interior of the skull and acting as a sheath around the spinal cord. The arachnoid mater, so named for its spider web–like fibers, makes arachnoid villi, or small protrusions through the dura mater into the venous sinuses of the brain. The villi allow cerebrospinal fluid (CSF) to enter the bloodstream. The pia mater, which is the deepest layer of the meninges, is a thin layer that’s impermeable to fluid, and so it cushions the brain and spinal cord by holding CSF.

"Mater" is Latin for "mother," and like any good mother the mater's job is to protect its ward. Isn't she wonderful?

Ever hear of meningitis? I vaguely remember being inoculated against four types of it before I went to college. Meningitis is a condition in which the meninges become inflamed, typically triggering symptoms such as headache, fever, and a stiff neck. The most common cause of meningitis is either a viral or bacterial infection. Bacterial meningitis is very serious and can even result in death if not treated within a few hours; most people recover, although permanent disabilities can result, like hearing loss and brain damage.

THE SUPERHIGHWAY: The Central and Peripheral Nervous Systems

Have you ever been so busy that you wished there were three of you to tackle everything you need to do? That's kind of like the nervous system. Imagine that the brain is a super overworked person who needs to delegate certain tasks; the different nervous systems are the coworkers who take on those tasks. 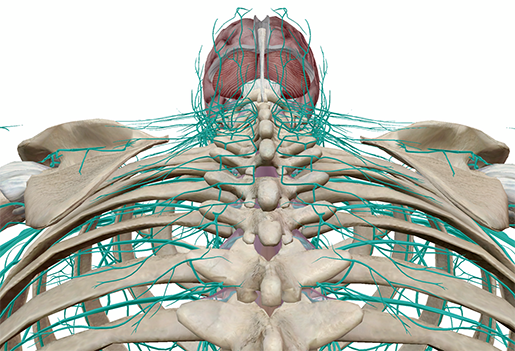 It's a team effort, as far as the PNS goes.

THE OLD TIMER: The Hindbrain

Okay, so if we hide the PNS and move on up the spinal cord, we'll eventually get to the hindbrain. The hindbrain is super old—it's been suggested that it first evolved from the Urbilaterian, the hypothetical last common ancestor of chordates and arthropods, somewhere between 555 and 570 million years ago. So homeboy's been around for a while.

The hindbrain, or the rhombencephalon, is an inferoposterior area of the brain that consists of the medulla oblongata, the pons, and the cerebellum. Like the PNS, the hindbrain has its own divisions: the metencephalon and the myelencephalon. 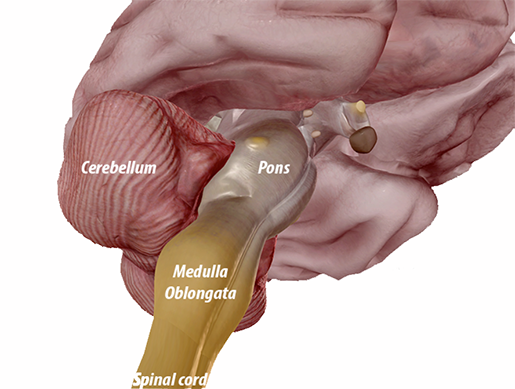 Of the metencephalon, there is the cerebellum, which is the largest part of the hindbrain. It fine-tunes body movements and manages balance and posture, as well as some cognitive functions and puzzle solving. There's also the pons, which bridges the two main function areas of the CNS: the brain and the spinal cord, conveying signals between them via white fibers. The pons is also responsible for breathing rhythms.

Most of the myelencephalon is the medulla oblongata (coolest name ever), which is a structure that’s continuous with the spinal cord and acts as the conduction pathway between it and the brain. It controls involuntary functions of the digestive, respiratory, and circulatory systems, as well as contributes to hearing, balance, and gustation (taste).

LOBE IT! A Look at the Four Lobes of the Cerebrum

Okay, now onto the main event: the telencephalon, or the cerebrum. The cerebrum's the largest part of the brain and is categorized into functional areas called lobes. It's divided by the longitudinal fissure into two hemispheres—right and left—and is connected by the corpus callosum, which you can kind of see in the fissure.

The four lobes of the brain are the frontal, parietal, temporal, and occipital—and both hemispheres of the brain have these lobes. The lobes are all named after the bones that cover them.

The frontal lobe is where higher functions occur, like planning, problem-solving, long-term memory, impulse control, and speech and language.

The parietal lobe integrates sensory information and plays a role in spatial perception—mine must be broken, because I can't seem to leave a room without bumping into the doorway.

The temporal lobe contains an auditory cortex that receives input from the cochlear nerve and is responsible for primary auditory perception. It's also associated with processing sensory input into derived meanings—like attaching emotion to visuals or recognizing faces. You know that rush of love you get when you see a family member or friend? That's the temporal lobe's doing. 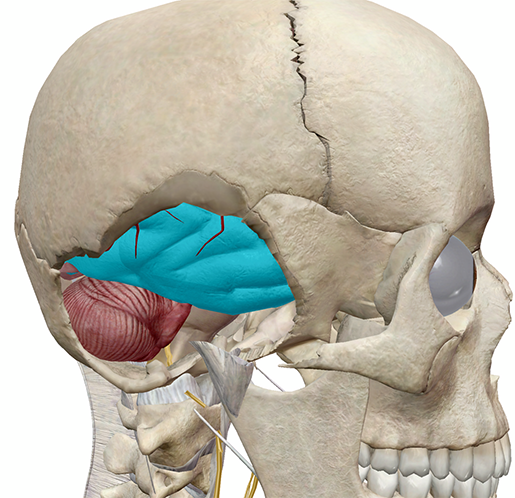 The occipital lobe is the brain's posteriormost (and smallest!) lobe. It receives input from the eyes and processes visual perceptions—not just in terms of sight, but in terms of assigning meaning to and remembering what you're seeing. 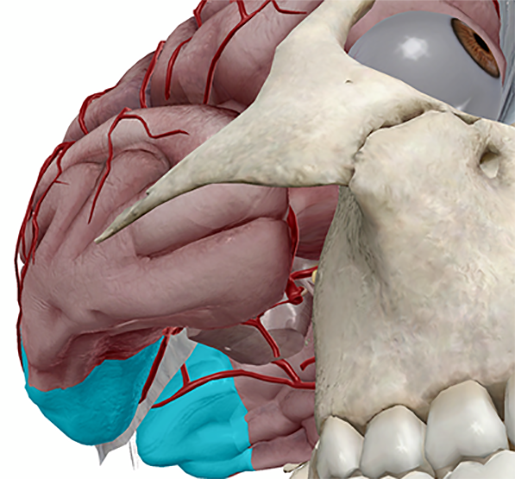 Now the cerebrum isn't just comprised of these four lobes. There are structures called gyri and sulci as well. A gyrus is a ridge, or a fold, between two clefts—the precentral gyrus and the postcentral gyrus, both between the frontal and parietal lobes. The gyri increase the cerebrum's surface area. The precentral gyrus contains the primary motor cortex and controls precise movements of skeletal muscles. The postcentral gyrus contains the primary somatosensory cortex and is responsible for spatial discrimination. There's a third—the cingulate gyrus—but it's part of the limbic system, which is another topic for another blog post. 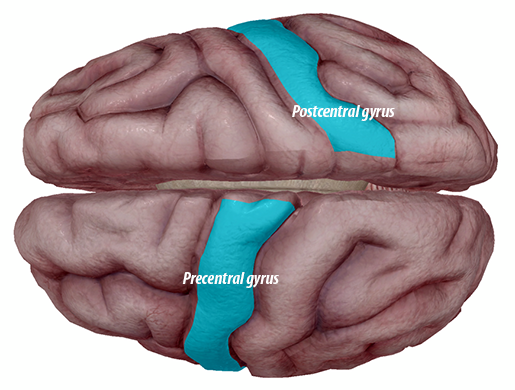 The sulci are fissures that separate the gyri; the more prominent ones separate the lobes. The central sulcus, or the Fissure of Rolando (I lied—this is the coolest name ever), separates the frontal and parietal lobes. The less-cool named lateral sulcus separates the parietal and frontal lobes from the temporal lobe. The parieto-occipital sulcus separates—you guessed it—the parietal and occipital lobes. 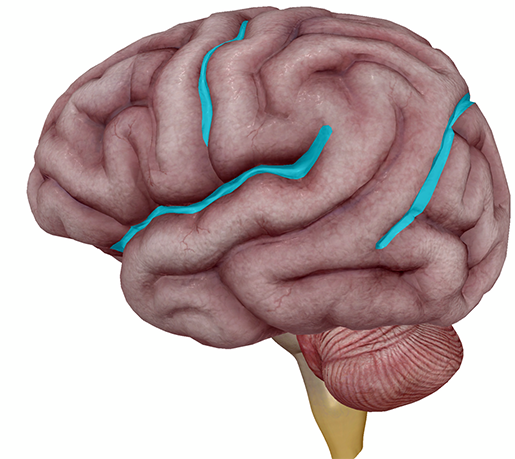 And there we are! The cerebrum and some of the other structures of the outer brain. If you're feeling proud of yourself for getting through all that information, remember: it's your brain doing that. It's making you feel good about reading an article about itself.