Anatomy & Physiology: The Neurocranium and Concussions

Take your hand, make a fist, and tap your head. You know that you’re rapping your knuckles against your skull, but did you know that if your skull weren’t there your knuckles would most likely get stuck in brain matter? Yep. You’ve seen pictures of the human brain: a pinkish-gray structure that looks like the inside of a walnut. However, your brain isn’t thick or sturdy—it has the consistency of gelatin! This is why your skull is so important: it not only gives your head shape, but it protects your brain.

The 22 irregular bones that make up the human skull are divided into two groups: those that form the neurocranium, and those that form the facial skeleton. The neurocranium (braincase) is comprised of 8 bones, while the facial skeleton is made up of 14 bones. If you press down on any part of your face (with the exception of your lips), you will feel the bone that gives it shape. However, if you touch any part of the top, back, or sides of your head, you will feel the bone that protects that part of the brain.

For this particular topic, we’re going to be looking at the major components of the neurocranium and its roles as both a protector and villain to the brain. (We’ll save the facial skeleton for another day.) 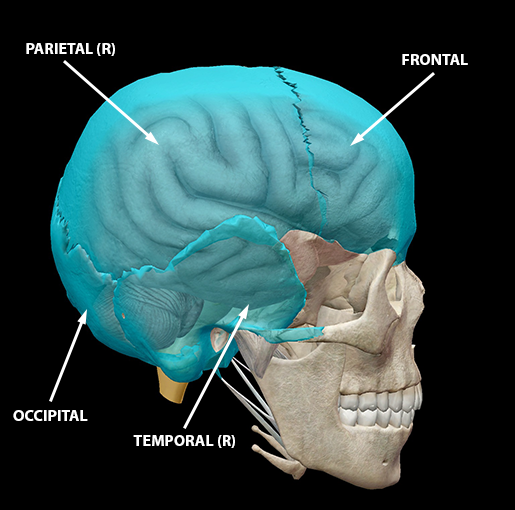 A quick break down of the calvaria:

In addition to the calvaria, there are two more bones that enclose the brain in the skull. The sphenoid is the keystone bone at the base of the neurocranium. It’s a spectacularly shaped bone (it looks like a bat!) that, in addition to containing the sphenoidal sinuses (air cells), has a deep depression that holds the pituitary gland. The other bone is the ethmoid, a spongy, cubed bone that gives shape to part of the roof of the nose and the orbits. The ethmoid is also home to numerous foramina through which the branches of the olfactory nerves pass.

Each bone is around 7 mm thick, and the brain is suspended in cerebrospinal fluid with three layers of meninges separating it from the bones. But any contact-sport player will tell you that sometimes those natural barriers don’t matter at all. The thing is, despite how well your body tries to protect the brain, the world has many dangers. Your brain is susceptible to all sorts of trauma, with concussion the most common.

But what is a concussion, exactly?

As I said above, the brain has the consistency of gelatin (or soft tofu), and sometimes when you take a knock to the head the brain’s vanguards aren’t enough to keep the brain from being damaged. The brain will bypass the cerebrospinal fluid and the meninges and drag over the hard inner surface of the neurocranium. This can result in damage and interference with normal brain function. Take a look at the video below (no audio).

The scariest symptom can be no symptom at all. Sometimes the person who suffers a concussion has no idea as symptoms don’t present themselves, which can be incredibly dangerous. The most significant complications associated with concussion are brain swelling and increased intracranial pressure (ICP). This is why all head injuries need to be checked by a medical professional, even if you think you’re fine.*

So remember: when you play sports or are doing something that could result in a head injury, wear a helmet. The neurocranium can only do so much to protect the brain; we have to do our part too!

(*Seriously, don’t try to walk it off. Err on the side of caution and get it checked out.)