The thumb (the first digit of the hand) can oppose the movements of the other digits in order to grasp and manipulate objects.

What do you, an opossum, and an orangutan have in common? Opposable thumbs!

Opposable thumbs have helped humans go from making and using our first tools to becoming technological and artistic prodigies. You could say they make it great to be related to great apes (though opposable thumbs or toes are present in some marsupials and lots of Old World monkeys too, so they’re not exclusively an ape thing).

Of course, our other digits should get some credit here as well.

As a whole, our hands are capable of incredibly intricate and precise movements—playing musical instruments, drawing, painting, sculpting, typing, forming hand-shapes and finger-spelling in signed languages...the list goes on and on.

So let’s talk about the anatomy of fingers and thumbs and learn what lets them do all that awesome stuff!

Bones of the Hand and Fingers

Did you know that one of the genes responsible for the formation of human digits (SHH) is actually named for Sonic the Hedgehog? Yes, the video game character, and no, I’m not kidding. Scientists are just that awesome.

Basically, when a tiny human is developing in the womb, their limbs start out as buds that look a whole lot like fins. The sonic hedgehog gene codes for a protein (SHH) that helps the limb form its individual digits as it develops. Variations in the expression of SHH can result in having extra fingers (polydactyly) or having fewer than five fingers (oligodactyly). If you want to learn more about the development of arms and fingers, have a look at this article.

Here are the bones of a fully developed human hand:

You can see that there are 5 metacarpals and a whole bunch of phalanges. The thumb has only two phalanges (proximal and distal), while the fingers each have three (proximal, middle, and distal). There are also the carpal bones at the base of the hand, but we’re not going to focus on those at the moment. 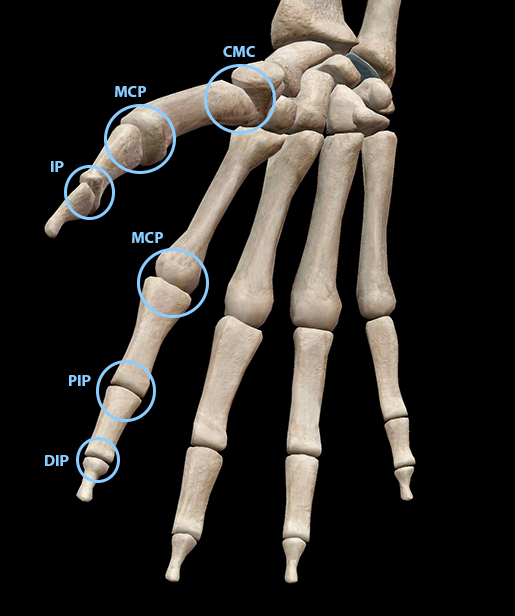 There’s also a ton of connective tissue keeping the hand and fingers together and properly bendy. The palmar aponeurosis, the commissural ligaments, and the cross-shaped cruciate ligaments are particularly striking. 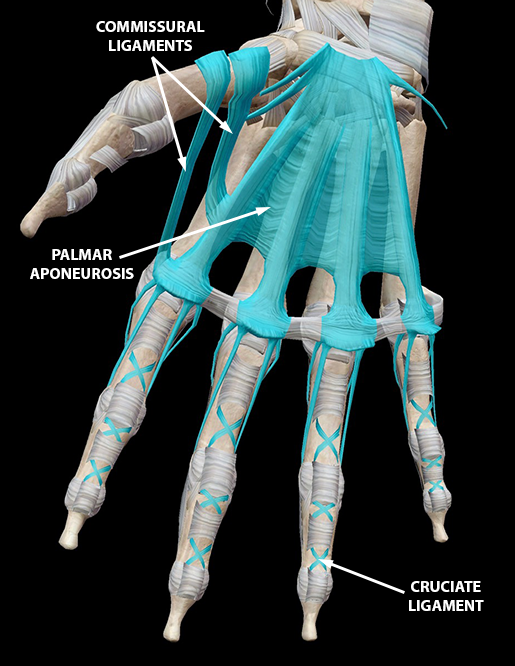 Moving the Digits: Muscles and Tendons

Now that we’ve got the skeletal structure of the fingers and thumb down, let’s look at the plethora of muscles and tendons responsible for flexing and extending them.

First, let’s talk about the flexion and extension of the fingers (digits 2–5). I like to think of these muscle motions as making up that “come at me” gesture from martial arts movies. You know the one: two fighters are staring at each other dramatically, one beckons to the other with a half smile, and the battle begins!

So, what about the thumb? The thumbs get their own extension and flexion, helped along by different muscles. The muscles that move the thumb are referred to as the thenar group. These include the abductor pollicis, adductor pollicis, opponens pollicis, and flexor pollicis brevis.

Before we move on to the next muscle action, I’ve got an interactive activity for you. Take one of your hands and hold it out in front of you. Then touch the tip of your thumb to the tip of each of your other fingers. Congratulations! You’ve just experienced the opposition of the thumb and digits. It's part of what makes the human hand so great for grasping and manipulating objects. 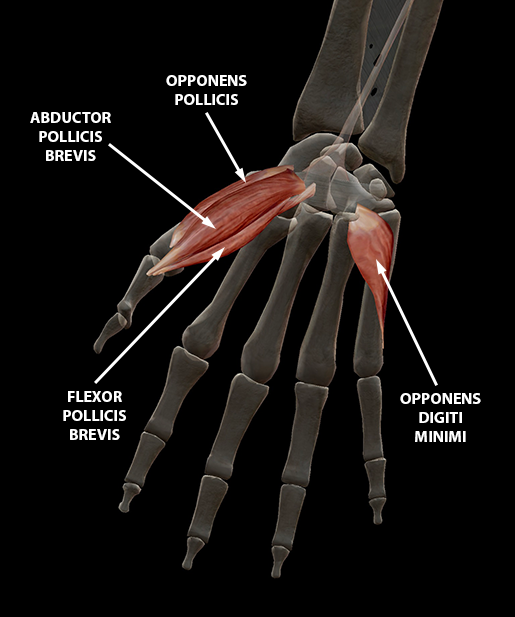 We use our hands for a lot of fairly dangerous tasks, and they’re also pretty fragile (relatively speaking), so it’s not surprising that hand injuries are common. Fractures and dislocations happen a lot, as do sprains.

Extensor tendon injuries, such as mallet finger, are quite common. Mallet finger is sometimes called “baseball finger” because it frequently occurs when a ball hits the tip of a finger (or thumb) and injures the tendon that straightens it. In cases of mallet finger, the tip of the finger typically looks like it’s drooping because the damaged tendon on the back of the finger can’t pull it into extension. Treatment usually involves keeping the finger straight (in extension) with a splint.

A huge number of people suffer from arthritis in their hands and wrists. The hands contain a LOT of joints, and we use them a ton every single day, so the fact that they degenerate as we age, resulting in osteoarthritis, makes a good deal of sense. One of the most commonly inflamed joints is the CMC joint of the thumb, resulting in pain, weakness, and a reduced range of motion. Treatment can range from physical or occupational therapy to steroid injections to surgery. Osteoarthritis also frequently occurs in the DIP and PIP joints of the fingers.

All in all, the hands are complex, with lots of literal moving parts. It would be pretty difficult for humans to function if we had fins like the Tiktaalik from this cool PBS video—just imagine trying to text—so thank you, evolution! Having opposable thumbs and dexterous fingers is a pretty sweet deal.