If you’re like me, you’ll sometimes toss your head from side to side as you sing loudly in your car (alone, with the windows up, of course—I’m not cruel). This action, in which your neck moves from a straight position to a lateral bend, is called lateral flexion, and a group of muscles called the scalenes (or scalenus muscles) help make it happen.

Let’s take a look at them.

The scalenes are muscles of the neck, but are also classified as being in the lateral vertebral region. They are responsible for movements of the vertebral column, as well as aiding in respiration.

The muscles in this group are:

Want to learn more about the scalenes and the other neck muscles? Check out our free eBook!

Muscle Actions of the Scalenes 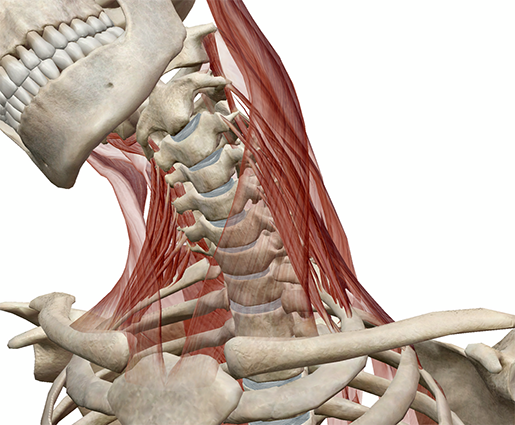 The scalenes are involved in a few actions involving the neck, as well as the act of inhalation.

Check out our YouTube page for more muscle actions!
Look straight ahead and then bring your chin down toward your chest. This is neck flexion, and the anterior scalene acts in it. The other muscles involved include the sternocleidomastoid (it’s in everything!), longus capitis, and longus colli. 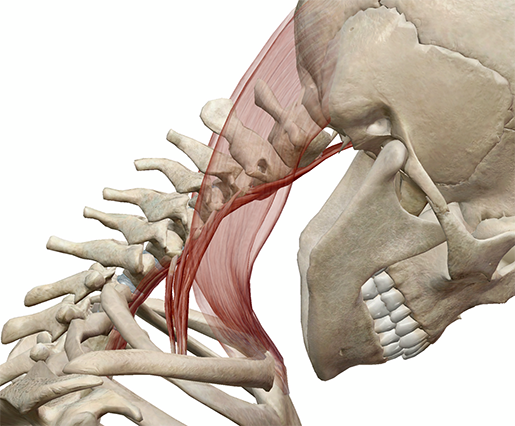 If you look straight ahead, then turn your head to the side, this is contralateral head rotation. The muscles involved include the sternocleidomastoid, rotatores longi, semispinalis capitis, and semispinalis cervicis. 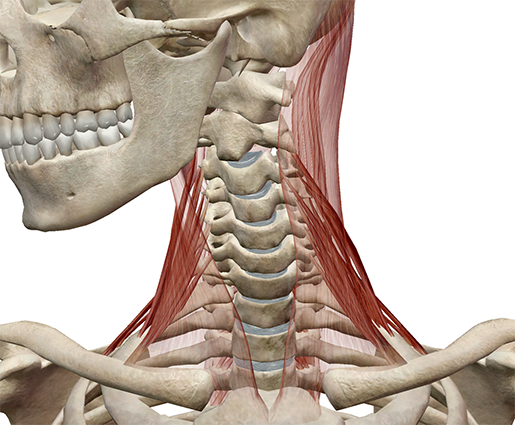 In the act of inhalation (breathing in), the scalenes, along with many other muscles (such as the intercostals), help elevate the ribs, while other muscles, like the diaphragm, help to expand the thoracic cavity.

Injury to the Scalenes

Since the scalenes are so involved in neck movement and rib elevation, they’re quite easy to injure or become irritated, as they’re working all the time.

Whiplash, an injury commonly sustained in car accidents, occurs when your head moves back and then snaps forward (like the crack of a whip), causing distortion of the neck muscles. The scalenes are often strained in cases of whiplash. Rest, ice packs, and limiting movement of the neck will help them heal.

The anterior scalene is involved with scalene myofascial pain, which is chronic regional pain that presents with hyperirritable spots called trigger points and a pattern specific to the muscle involved (in this case, the anterior scalene). Scalene myofascial pain is frequently misdiagnosed as another neck pain–associated radiculopathy. Visiting a professional, such as a chiropractor, for treatment, as well as resting and icing the muscle, can help.